Last week, I showed a small, 2-seater aircraft in 1:48th scale that I intend to use for Pulp wargaming: the Avia BH-11.  Whilst this will be useful, I really need an airliner for my next intended scenario.  However, an iconic 1930s plane such as the DC-3 has a wingspan of 95 feet.  At 1:48 scale, that's very close to 2 feet (60cm) across!  A German Ju-52 trimotor has almost exactly the same dimensions, so that's no better.

On a 3' gaming table, a 2' wide model would dominate, leaving little room for anything else.  Equally, the cost of such a large kit and the storage requirements of the completed model are offputting.  So, what to do?

Instead of looking for a medium-sized airliner such as the DC-3, I decided to search for much smaller twin-motor craft.  Here's one that I found... 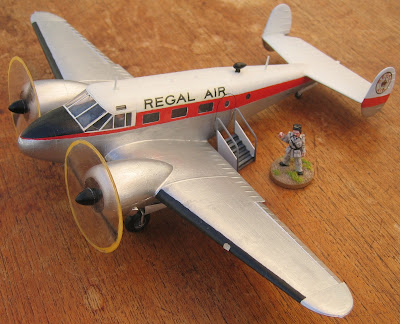 The Beech Model 18 (also known as the "Twin Beech", or "C-45 Expeditor" when in USAAF service) was a small transport aircraft that was produced in surprisingly large numbers.  It typically carried about 7 passengers (compared to the DC-3's capacity of 30 or so).  The Model 18 first flew in 1937, so it just about fits in the Interwar period that I desire for Pulp adventures. 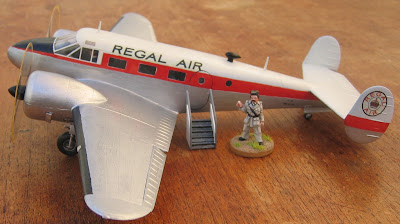 Because the original is a relatively small craft, the 1:48th scale model has a wingspan of marginally under 1 foot (30cm).  That's much more manageable on a wargames table!  I've included a 28mm figure for comparison purposes, as well as a home made set of steps. 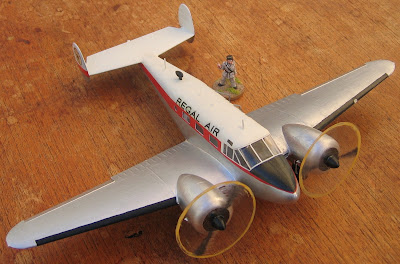 So, what can I tell you about this model? 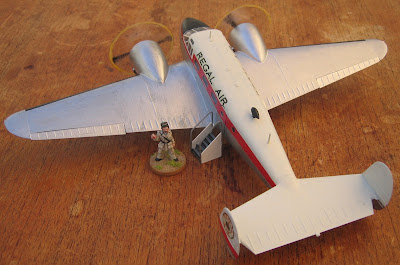 The ICM Beech 18 kit makes a nice model that is a very good size for 28mm figures and not hugely expensive either.  However, it is primarily intended as a scale modeller's kit rather than for wargaming.  Consequently it was a bit more intricate to build than I might have desired.  The big concern I have is how fragile it will be, though as a static centrepiece for a game it shouldn't have a lot of handling.
Posted by Colgar6 at 11:32