Would you believe it?  This is the 5th year running that I have participated in Zomtober (see here for rules and a list of participants).  As a quick reminder, here are my previous efforts:

As ever, my Zomtober presentation is a "duel" between a survivor and a zombie.  In this case, the survivor is a little girl named "Abbie".  I'll call her opponent "Generic Male Zombie" (GMZ for short), because I cannot think of anything particularly unusual to mark him out from the crowd. 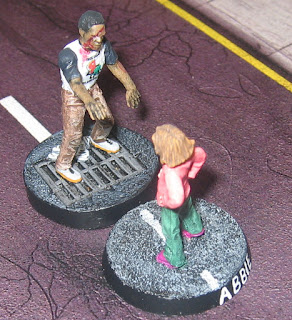 GMZ is a plastic model from Studio Miniatures (at least, the body and arms are; I'm not certain that I didn't take the head from somewhere else).  His tee shirt has been decorated with a home made decal.  The figure is mounted on a base from Escenorama. 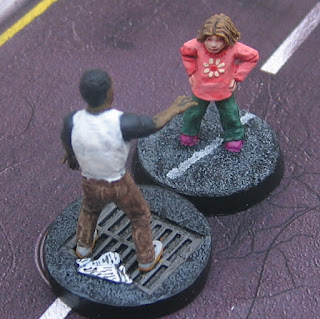 Abbie is a metal model and I really cannot recall where I obtained this miniature.  She has the look of a figure from Foundry Miniatures, but could just as easily be from somewhere else with a similar sculpting style.
In fact, I wasn't even aware that I had this model until I was looking through a box of part-painted figures a few weeks ago, with a view to finishing off some old projects for Zomtober.  No, I really don't remember her at all... 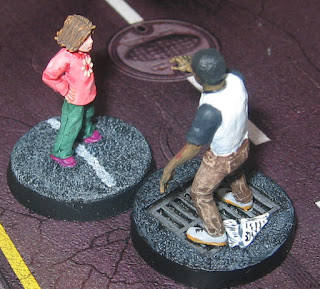 So, who will win the duel?  Abbie seems confident - defiant, even - but I don't think there is a remote chance that she could win a physical contest with GMZ. 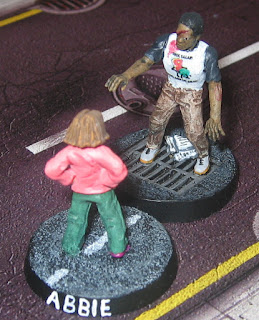 Is she aware of the danger and taunting him?  Perhaps (trying to be charitable here) she is trying to lure the zombie away from another survivor who is in trouble?  Or is she really so sure of herself that she sees no danger here?  Playing "chicken" with the undead doesn't seem very sensible, but not running away if/when he lunges for her would be truly disastrous!