I've run games that pit men against ice age mammals before [for example, here, here and here] and my "go to" set of rules was "Adventures in the Lost Lands" by Two Hour Wargaming.  However, despite the number of times that I've tried this game, it didn't quite work for me.  Either a player's choices were too limited or combat outcomes were too one-sided or something; it just wasn't the game I really wanted to play.

I've never given up hope for a hunting game, though.  Now there is a new kid on the block: "Paleo Diet", from Ganesha Games.  In Paleo Diet, one or more players take control of a small number of hunters.  These humans can be equipped with bows, clubs, fire and/or dogs, though the default weapon is a spear which can be thrown a short distance or used close up to stab at things.

The basic mechanism is that a hunter chooses to roll from 1 to 3 dice each turn, with a "success" granting an action and a "failure" alerting a nearby animal.  A fresh, unwounded hunter has a pool of 2 white dice (success on a 2+) and one coloured dice (success on a 4+); an injured man downgrades one of his/her white dice to a coloured one.

Animals never act on their own, but rather they react to various events such as the proximity of a fire, being attacked or a hunter failing an activation roll.  Different classes of creature (from apex predator to small prey animal) will react differently, but on the whole if you're far enough away they will ignore you and if you're very close then their reaction will be more extreme.  Usually the carnivores and large herbivores (mammoths &c) will defend themselves aggressively whilst smaller herbivores will run away - but different reactions such as roaring/trumpeting or stampedes are also possible!

So far, so good; this sounds very much like the sort of game I'd like to try.  Everything in a hunting game depends on the animal behaviour, though: is it believable?  Let's see... 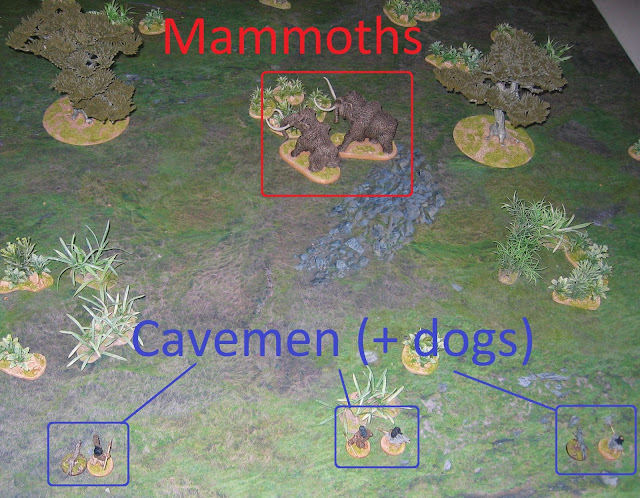 We had 3 players, so we set up 3 groups of hunters.  One group had 2 neanderthals, whilst the other 2 groups each had a neanderthal and his dog.  So, a total of 4 men and 2 dogs.  Let's go mammoth hunting! 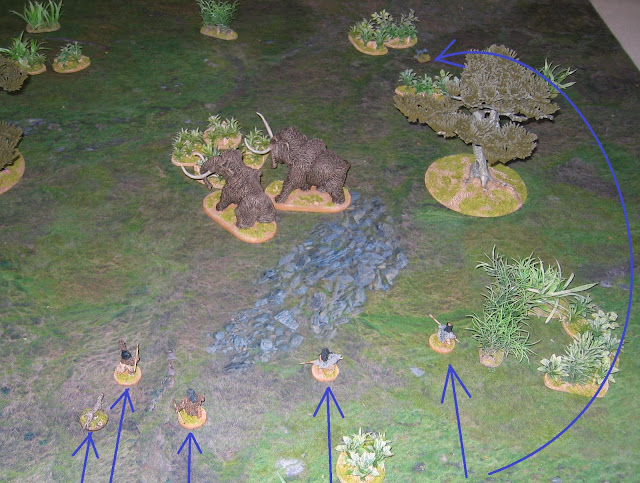 After a short conference on tactics, we decided that we needed to split up the pair of mammoths and concentrate all our efforts on just one of the beasts.  Goodness knows, it would be hard enough to face even a single such creature!

To this end, the hunters crept forwards carefully.  Crug sent his dog on a wide, flanking move.  In hindsight, this wasn't a terribly clever idea: if the dog failed any of its activation rolls in the future then it would probably try to rejoin its master, which would result in it sauntering through the mammoth herd.  That's not really what we intended! 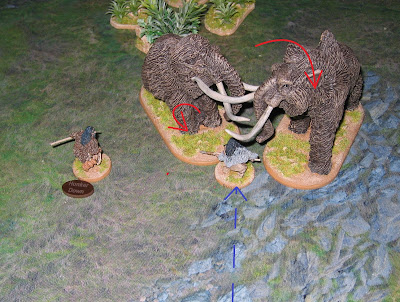 Durc stalked right up to within touching distance of the mammoths, planning to hide and ambush the chosen target later.  Unfortunately, something gave him away and both beasts rounded on him 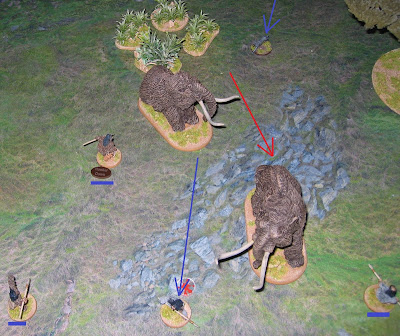 The hunter wasn't badly wounded, but he was pretty shaken up.  It didn't help that one of the mammoths then trumpeted loudly and the other pursued him for a short distance; Durc fled!  Well, at least we had split up the pair of mammoths; there was now a significant gap between them... 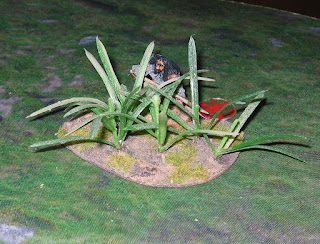 Durc spent much of the rest of the game hiding in some foliage.  The player claimed that he was laying a fresh ambush, but personally I reckon he had soiled himself. 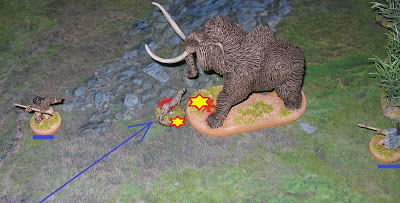 Broud's brown dog then decided to have a go at the nearer animal.  It did manage to bite the pachyderm, but the mammoth squashed the dog in return. 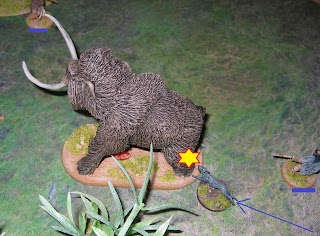 Then, Crug's grey dog had a go.  It rushed in and bit the mammoth on the bottom (so that's 2 wounds inflicted; another two will bring it down). 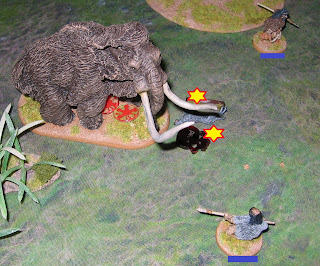 The mammoth reacted with extreme hostility to this assault on its nether portions; it spun around and flattened the dog.  Hmm, both dogs are now out of the game - but that's OK because they don't count against us when determining victory. 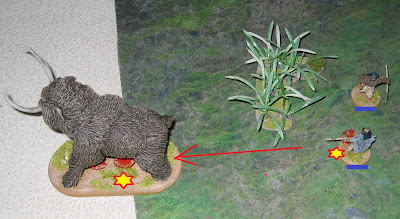 The hunters (apart from Durc) moved in and tried to spear the mammoth.  There followed a long and confused sequence of quick assaults, trumpetting, retaliation and so on [far too complex to describe in detail!].  Any notion of a plan had gone out of the window after the beast's first short charge!

The end result was that 3 of the 4 hunters were injured, but the mammoth had taken a 3rd wound out of the 4 hits it could sustain.  Sadly for the hungry tribe, the mammoth ran off the table before it could be finished off.

One player suggested that we had a go at the other, uninjured mammoth that was still grazing peacefully in the middle of the table.  This suggestion was quickly vetoed by the other bruised and battered hunters!

End Result: mammoths are tough to hunt, especially without ranged weapons and/or fire; expect casualties.  Leave the dogs at home; they might be good enough against a deer or a wolf, but they're really outclassed here! 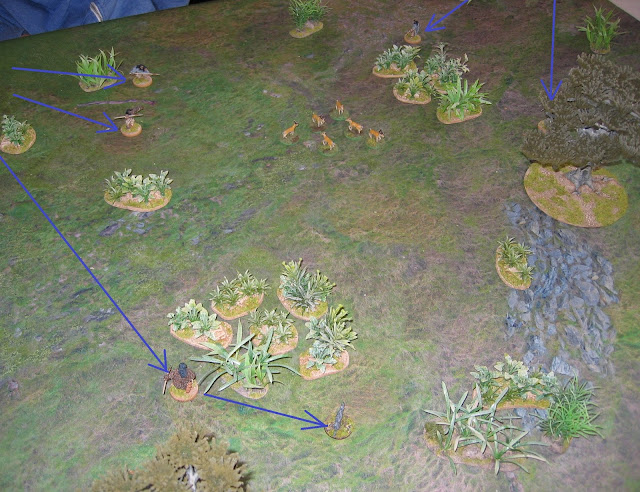 For our next hunt, we decided to try some smaller prey.  This time, there were 5 neanderthals and only 1 dog; we had a small herd of deer as our target.

The hunters stalked carefully around the edges.  Our plan was to surround the herd and then pick off as many as we could from close range.  We needed to kill 3 of the 6 deer to collect enough meat to feed the tribe, so we really didn't want any to escape if we could help it. 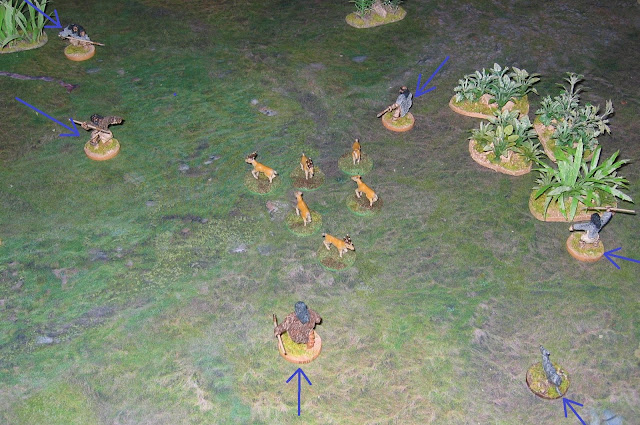 Initially, the plan seemed to be going very well.  All the hunters (and the dog) crept closer and closer... 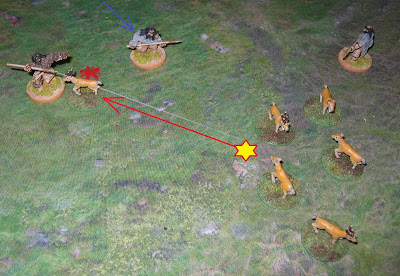 The first hunter to act was Broud.  His thrown spear hit a young buck and wounded it, but the startled and confused animal then ran straight at the hunter and tried to attack him!  Fortunately for the man, the deer then fled in the opposite direction without injuring him. 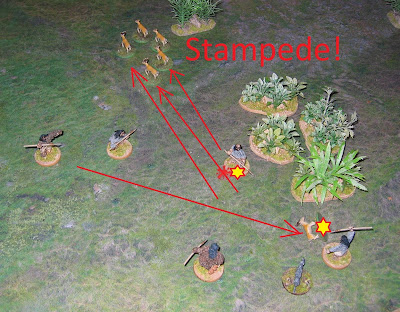 The panicking, injured buck fled straight towards Goov, who had no difficulty in felling it at close range.  As he did this, the rest of the herd stampeded, running over the unwary Crug and kicking him in passing. 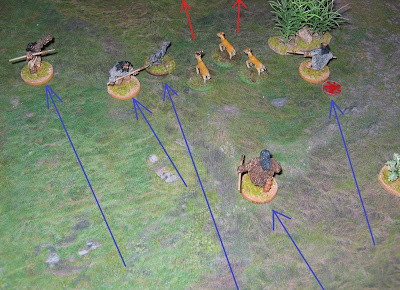 The hunters scrambled to try to head off the small deer before they fled out of reach; it looked as if their prey was about to elude them. 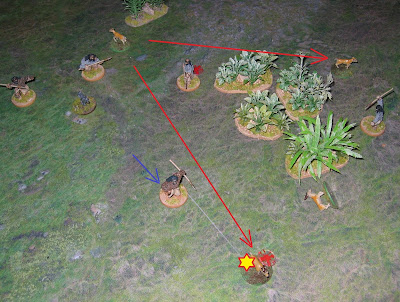 All their efforts achieved was to scatter the herd; deer ran in all directions.  Brun managed to bring down another buck as it raced past him, but no-one else was so lucky.  Despite a brief stalk of the remnants of the herd, all the other deer eluded the hunters and fled to safety.

End Result: we didn't gather enough meat to feed the tribe and one of our hunters got a broken rib!  Not the ideal result, though at least we weren't totally hopeless.

I think that we all enjoyed these games very much.  The players each had plenty of choices each turn and the animals reacted in what seemed like a realistic manner.  I don't think this will be the main event in one of our gaming days, but it's a very pleasant filler (it would work very well as a participation game at a convention, I think).

Clearly, our hunting tactics leave something to be desired - but that could change with practice.  Perhaps we should set more ambushes and then have a few hunters drive the prey into them by shouting and/or throwing stones?  I'm also quite keen to experiment with that new wonder weapon which Ug keeps talking about: fire!  More figures have been ordered...

Afterthought: even the deer are dangerous; they hurt one of our hunters.  Maybe my stone age men should become rabbit hunters instead.  What could go wrong with that?
Posted by Colgar6 at 15:13