This is the second period in Zomtober 2018 and so far I'm keeping to my pledge of painting at least one zombie or survivor each week.  In case anyone is new here (does that ever happen?  If so then you're very welcome 🙂), I've gone slightly beyond the absolute minimum required, in that I've painted both a survivor and a zombie.  These are presented below as a duel, with the standard question of "what happens next".  See what you think... 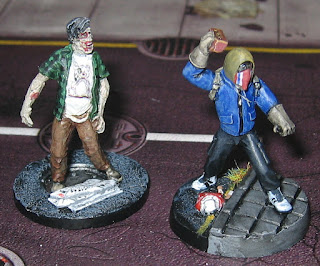 Today's survivor is "Brett".  He's heavily wrapped up, with his head and face covered and thick gloves on his hands.  It's hard to tell what age Brett is from his appearance, but his clothing and manner suggest that he's probably a young man. 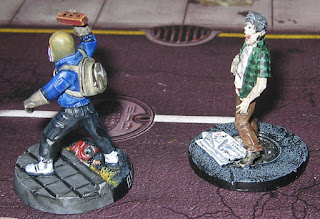 Facing him, or rather creeping up behind him, is "dead average zombie" (DAZ).  This is one of the most unremarkable zombies that I've painted in quite a while; he's definitely just "one of the herd". 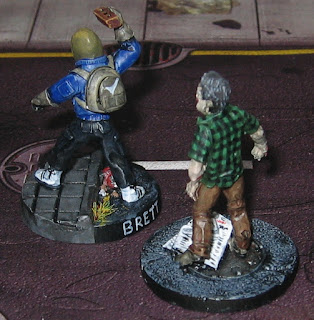 If I had posed these models with both facing each other then I don't think that most observers would have given much for DAZ's chances.  After all, Brett looks young, fit and aggressive - and he has a weapon (even if it's only a house brick).  Brett should therefore be quite capable of defeating a lone zombie with no special features.

However, this time the zombie is behind the survivor.  Brett doesn't seem to have noticed the peril; he's too focussed on his current task.  Maybe he's breaking a shop window in order to loot it, or maybe he's defending against another zombie that we don't see in this vignette?  Either way, it would appear that Brett's choice of clothing has muffled his hearing and restricted his peripheral vision. 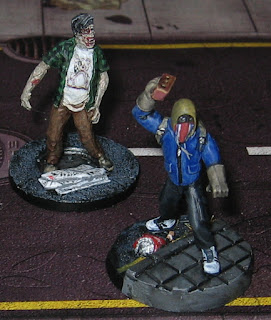 Like last week's duel, the survivor is from Offensive Miniatures, specifically he's one of the street kids from their "Rioters and the Law" range.

DAZ is from Studio Miniatures; I forget which pack.  Both models are fixed to resin bases from Escenorama.

So, will Brett notice DAZ (and be able to respond) before the zombie makes an attack?  Failing that, will the survivor's heavy clothing provide enough protection to defend against the initial onslaught and give him a fighting chance of victory or escape?  Will Brett's thrown brick bounce off the toughened glass of the store he is trying to loot and hit him instead (or DAZ, or both)?  What you you think?