Whew!  It's the last weekend in Zomtober 2018 and I've finished my models!  Well, OK - that's not entirely correct.  The figures you'll see below have had all the painting done, but they haven't yet been varnished.

Sealing these models would only take a moment, but I want to hold off for a while because the wash I've used on the bases is still slightly wet in some of the deeper recesses.  I know from bitter experience that if I spray sealer over paint/wash which isn't completely dry then the models will go "milky", at least in the damper parts.  It's better if I wait for a few days before varnishing.  Anyway, all the rest is done... 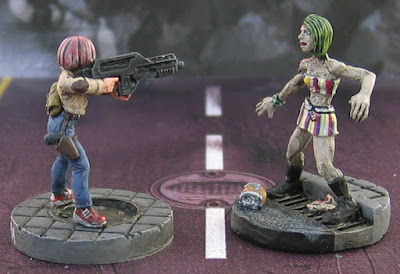 Today's duel is between a couple of young women.  The lucky one (the survivor) is "Cora".  She's young, slim, pretty and armed with an assault rifle and a revolver.  Presumably the satchel slung over her shoulder holds spare ammunition, food, medicines or other useful survival equipment.  I've experimented with colours by giving her pink hair; not something I usually do. 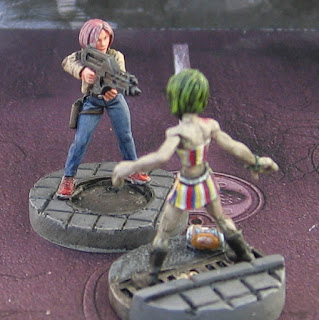 The unlucky one is also young, slim and was probably pretty when still alive.  However, she's now a zombie.  She has half the scalp on one side of her head torn off, as well as gashes and cuts on one leg.  I'll call her "Green-haired Zombie" ("GHZ" hereafter) because she also has been used to practice my painting techniques.  In this case, I've given her green hair and a striped, multi-coloured skirt and top. 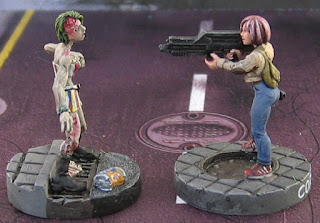 Cora is a Hasslefree model.  Indeed, I believe that she's just another version of the survivor I presented last week, though the model is still an excellent one. 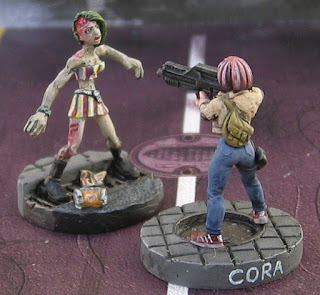 GHZ comes from one of the "zombie mobs" produced by Studio Miniatures.  Personally I think that the sculpting is a little weak on this figure; she has slightly overlong arms and legs and an implausibly narrow waist.  The model is still good, just not great. 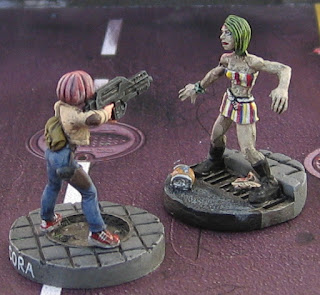 As always (at least, until I run out of them), both of these figures are mounted on Escenorama resin bases.  Cora's base is fairly plain, but GHZ is standing in a gutter near a crushed Irn Bru can (look it up if you're not Scottish) and a torn takeaway menu.

It looks to me as if Cora has this all day long.  She has a good weapon which she seems to know how to use (no firing from the hip!) and she seems fit enough to be able to fire it.  The zombie isn't particularly special in any way, but there are just a couple of doubts in my mind about this duel even so:
So, as always: what do you think will happen next?  Comments below, please 😃.