The Battle of Santa's Farm!

Even if I haven't done so in any of the previous 12 months, this is the time of year when I host a large-scale battle using the Hordes of the Things rules.  What's the occasion?  Why Christmas, of course - when I retrieve my Santa-themed army and put it on the table with various allies and enemies.  Let the best man/saint/troll/goblin/snowman win!

Last year, Santa routed the opposition.  Can he repeat that success this year?  Read on... 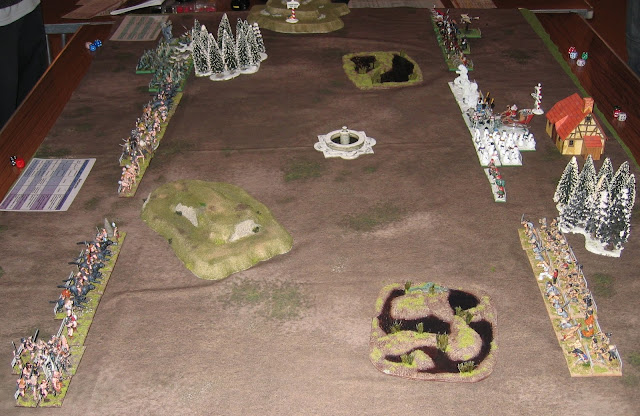 We had 6 armies facing each other across the table in this game.


For the good side (top to bottom):

Evil (or at least, naughty, selfish and greedy): 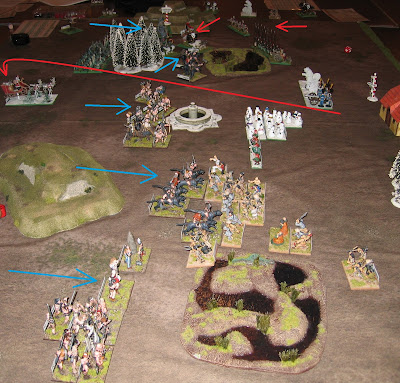 As one might expect, the evil side advanced across the board.  If they could just capture Santa's house then it would be "game over", so they had every incentive to play aggressively.

In the far north, the Tilean general rode forwards, perhaps a bit recklessly not waiting for the rest of his troops.  He was swiftly surrounded and cut off by goblins and trolls.

Santa flew his sleigh right over the enemy lines and circled behind them.  He was waiting for an opportunity to pounce on any unsuspecting element. 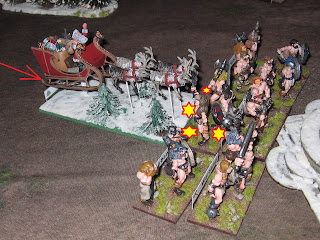 His first chance arrived almost immediately, as the (centre) barbarians ignored him in favour of continuing their advance.  Santa's sleigh swept down on their back ranks and destroyed one element before taking off again! 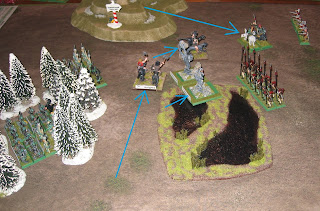 To the north, the Tilean general was cut down; this shook and demoralised the remainder of the mercenary force.  Many of them immediately turned and fled, though the spearmen and crossbows held their ground.  Demoralised enemy forces: Good (0), Naughty (1).

Interestingly, the Tilean duelists were engaged with massed goblins in the forest; the sneakers couldn't really be hurt by the hordes (or vice versa) - but they couldn't/wouldn't break off either.  The goblin hordes spent much of the game tied up in this useless fashion - hunting for assassins that they just couldn't pin down! 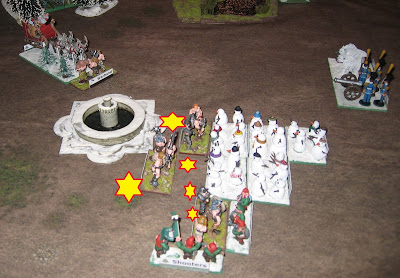 Near the fountain in the centre, the snowmen started to tear apart the advancing barbarian warbands in front of them.  The elf shooters, having disposed of their barbarian counterparts, joined in as well.  Before long (and completely against the odds), the barbarian (centre) force was decimated and demoralised, with only a few stray elements dispiritedly holding their ground.  Demoralised enemy forces: Good (1), Naughty (1). 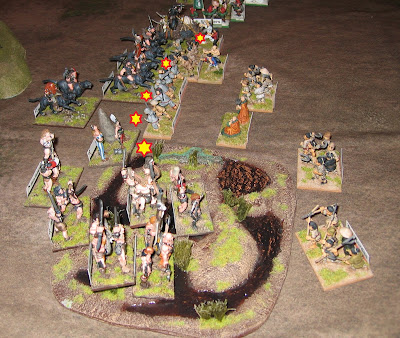 At the other end of the battlefield, the Kung Fu swordsmen held off the barbarian cavalry and heroes.  Mostly...

After many turns in which the combat swayed too and fro, the barbarians (right wing) stepped up a gear and chewed through much of the Kung Fu army in just a single turn, whilst only taking a few losses.  Demoralised enemy forces: Good (1), Naughty (2). 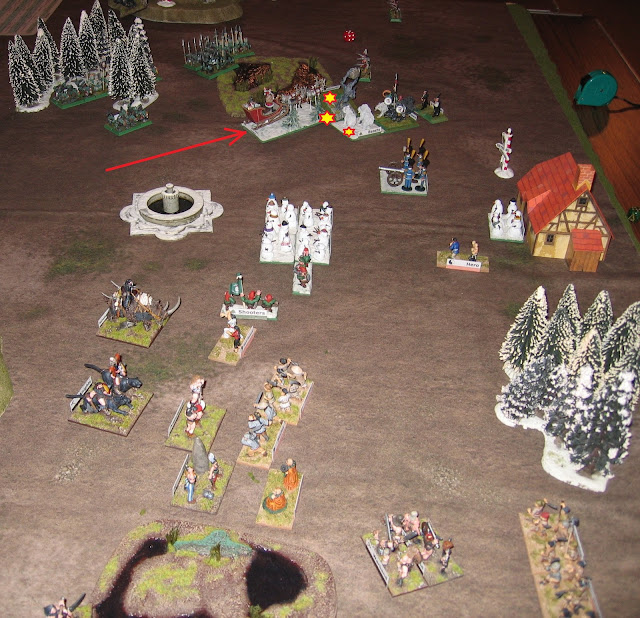 In the middle of the game, Santa struck again!  This time he landed in a swamp in order to attack a troll that was involved in a complex fight involving the goblin general and some of his ice bears.  Let's just say that it didn't go very well for either element in the middle of this fight! 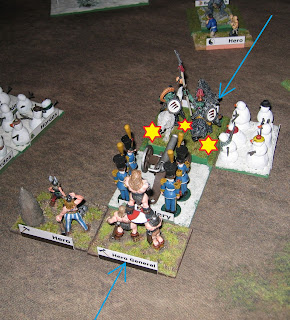 The loss of the Tileans had uncovered Santa's flank and the goblin general thought he saw an opportunity.  He led his wolf riders into a charge against Santa's toy cannon, which was then also attacked in the rear by a couple of barbarian heroes from the other flank.

This didn't look good at all.  However, I am reliably informed that the cannon was loaded with Christmas trees this time - not like earlier in the game, when we figured it must have been firing marshmallows, for all the damage it was doing.  The goblin general was well-and-truly skewered and with his demise the remaining goblins decided they wanted no further part in the fight.  Demoralised enemy forces: Good (2), Naughty (2). 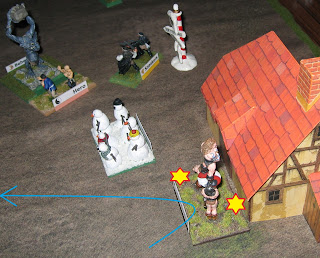 So, it looked as if it was coming down the the wire now.  There remained just Santa's army (somewhat damaged) and the barely-touched barbarians (right wing).  The swift barbarian chieftain made an attempt to break into Santa's house, but was chased off by Mrs. Claus (I imagine a rolling pin was involved, possibly also with the threat of ... soap.  Or mistletoe). 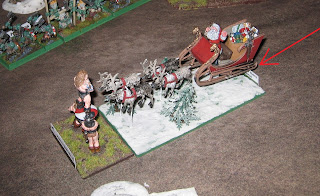 Not fancying his army's chances - they were slightly outnumbered and somewhat scattered & out of position - Santa decided to finish this in single combat with the enemy general, "mano e mano".  Whoever lost this fight would probably lose the game, as the remainder of their army would almost certainly be demoralised and withdraw from the battle.  Santa charged his sleigh straight at the barbarian prince... 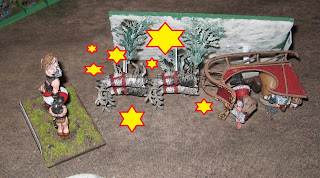 .who sidestepped nimbly at the last moment and overturned the man-in-red into the snow.  Thus ends the tale; Christmas is no more; victory to the barbarians!

This was a special game, especially as I managed to persuade several club members to play their first game of Hordes of the Things because of the occasion.  I believe that it was much enjoyed by the participants and I hope that the tale will be appreciated by all my other readers too!