I've been working on some Dreadball figures recently.  As well as some MVPs and coaches/assistants, I'm experimenting with styles of painting for my mechanite/robot team.  See what you think. 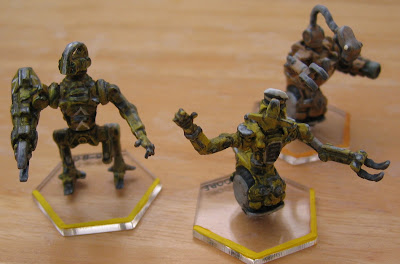 I have a mechanite team for Dreadball.  Indeed, I've had it for quite a long time.  However, until recently it languished in my "lead pile" of unassembled & unpainted miniatures.  This autumn, I'm trying to make some progress on these models and to date I've finished three of them: TRS-80, Commodore and VIC-20. 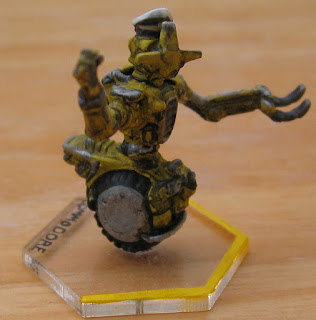 I'm aiming for a grungy, beaten-up look.  There are a handful of trivial conversions in my builds so far - for example, Commodore wears a yachting cap (who knows where the robot obtained that?). 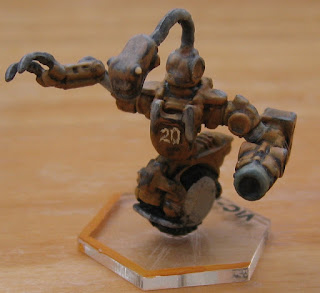 These models are difficult to build, having a myriad of tiny pieces - all with some form of mould line that needs attention.  That's even leaving aside the game-affecting decisions on which arms/legs/torso/head to put together.
I'm finding them difficult to paint as well; there is a lot of detail on these models - but much of it is quite 'soft' because of the material from which they are made.  The paint jobs I have put on them took some time, yet I'm no happy with the results.  Are they too grungy?  Is the painting too sloppy?  Are the colour choices not good?  I can't quite put my finger on it... 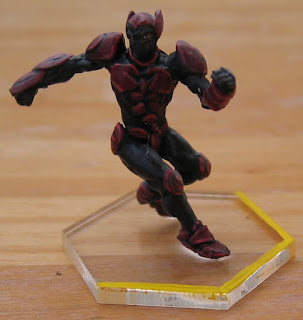 In contrast, I painted Nightshade very swiftly.  From memory, most of the work was completed within a short evening (and alongside other work, at that).  He's a star player with a very shady past, so muted, sombre painting works well.  I'm particularly pleased with the eyes, which were something of an accident.  The whites add a tiny speck of light to what is otherwise a very dark figure. 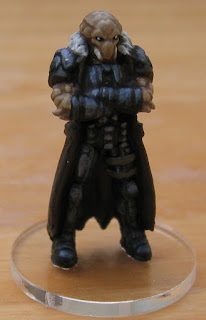 Now here's a coach/sponsor that I started a long time ago (painted the flesh) and then just stalled.  When I eventually decided to do him in a brown trench coat and metallic blue armour, the model was finished very rapidly.  I just wish I had done this long ago, instead of putting it off.  Now that he's finished, I'm quite pleased with the result.

I'm delighted with the way that Nightshade and Blaine turned out.  So why am I unhappy with the robots?  Ah, maybe I'm just my own worst critic, I dunno...
Posted by Colgar6 at 15:14