It's been a while since I put any new items on my blog.  There are a number of reasons for this, some personal and some to do with the state of the world.  However, I never intended to stop forever.  So, here's a Zomtober post for 2020.
The rules of Zomtober can be paraphrased as this: "show at least one recently-completed zombie or survivor model every Sunday throughout October".  My self-imposed (and initially accidental!) extension to this is to show a zombie and a survivor, posed in such a way as to suggest an imminent conflict.  The question is then "what happens next?" - there's no right or wrong answer, but it's interesting to think about it.
By my reckoning, I've been putting up 'duels' for Zomtober for the past 8 years (I started in 2013).  It seems that the popularity of this event is waning, but still I'll post something for it, if only to amuse myself.
Here's a link to allow you to find all my Zomtober posts (old and new): https://colgar6.blogspot.com/search?q=zomtober 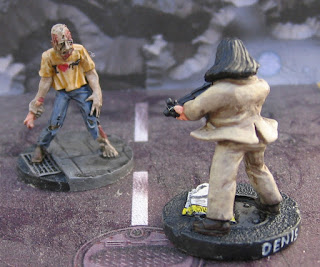 Why "ILP Zombie"?  Well, because he has a t-shirt with a logo that reads "I <heart> <pony>".  I don't know if anyone can make this out on his rather creased and folded shirt, but take my word for it - that's what the decal says.
ILP is a rather battered-looking zombie.  In particular, his face seems to be quite badly melted or otherwise damaged.  On the other hand (pun - geddit?), he is grasping what's left of someone else's forearm, so he is possibly more dangerous than he appears. 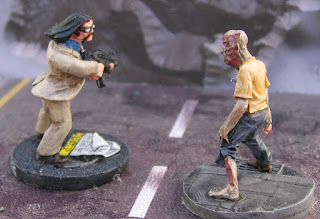 Denis is a youngish man who seems to be well-armed, fit and healthy.  He is, however, stuck in the fashions of the 1970s or thereabouts.  Does that matter?  Probably not - there's no evidence that his style of clothing or long hair would impede his ability to fight a zombie. 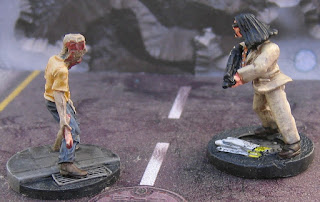 No, it seems to me that Denis' main problem is surprise.  He seems to be looking over one shoulder, as if the zombie has caught him at least partially unaware.  At the very least, his eyes and his gun are pointing in different directions and he might lose valuable time in correcting this.  But that would only matter if the zombie attacked immediately, without giving Denis time to react.  Right? 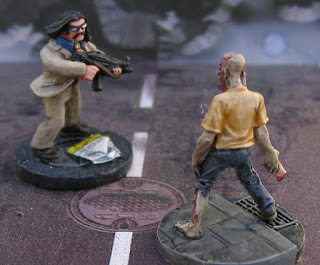 Denis is a Foundry "Street Violence" model.  I'm fairly sure he's from a packet of Russian mafia or hit men - something like that.  He's mounted on a resin scenic base from Escenorama.  "Street Violence" is a venerable range, but still in production.  I have quite a few unpainted pieces; some of them suffer badly from being wildly different sizes, but Denis is very reasonable in this respect. 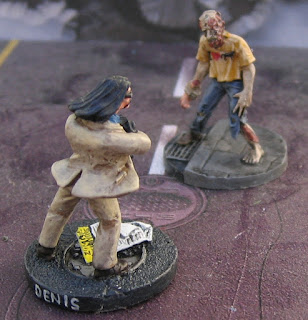 ILP is an old Studio Miniatures zombie and is also on an Escenorama base.  I don't think he's the best zombie model I've ever seen - though not the worst either.  He'll do well enough as part of a horde, I imagine.

I don't think there is much doubt that Denis has the firepower to win a ranged fight.  So, will ILP just stand there and be gunned down?  Or will the zombie wrestle with Denis before he can shoot and chew on his sideburns?  What do you think?
Follow me for week 2 ==>
Posted by Colgar6 at 15:38