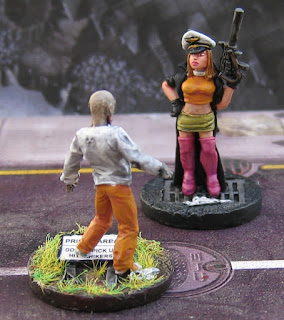 This week's confrontation is between a young woman called "Polly" and a zombie who is possibly in prison uniform.  Did he escape from a nearby incarceration facility?  Perhaps; the broken sign over which he is stumbling would add weight to his idea.  Let's call him "prison escape zombie" (PEZ). 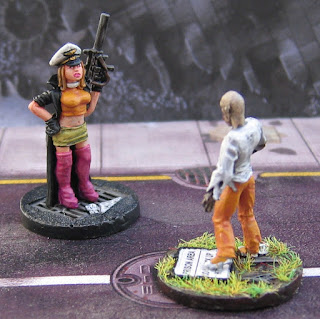 Polly is a classic example of the concept that there is no dress code during the zombie apocalypse.  All I'm doing to say about her costume is that it is (to my way of thinking) a very weird assortment of styles and colours.
So, are these her working clothes?  Did she choose to dress this way when leaving home in the morning?  Or were these the only items of apparel that she could find?  All these theories seem somewhat implausible and I'm not entirely sure that I want to know the answer.
Polly comes from one of Wargames Foundry's weirder packets in the hit-and-miss Street Violence range.  I'm happy enough to have one such model in my collection, but I don't think I want a whole load more "sluts with guns". 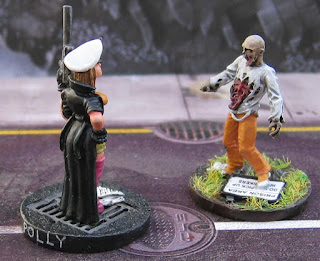 In contrast, PEZ is a fairly plain zombie, dressed in a ripped (more accurately, shredded) tee shirt with orange trousers and gym shoes.  He's moderately damaged, both on the face and the belly - but is still lurching along.  PEZ is a Studio Miniatures model. 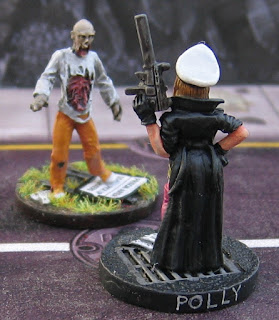 So, who will win this duel?  Polly seems totally relaxed and confident, she has a potent gun and seems healthy, aware and fit.  Is this a slam dunk for her?  Can anything go wrong?  Does PEZ have a chance?  You decide... 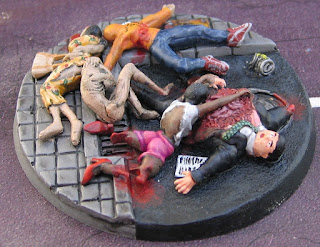 Some weeks ago, when I was contemplating how to tackle the Zomtober challenge, I thought that it would be nice to include a scatter terrain or objective piece with each week's entry.  Well, I failed completely to have anything ready for Week 1!  However, I had one large (70mm?) urban base left from my long-serving, assorted packet of Escenorama resin pieces. 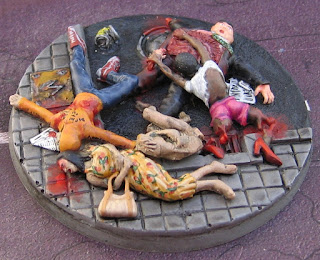 I also had a packet of "corpses" from TT Combat, plus quite a few bits from various Wargames Factory zombie & survivor kits.  I decided that I could put these all together to build a pile-of-bodies model.  Note that several of the contributor models have been converted, mostly to reposition limbs. 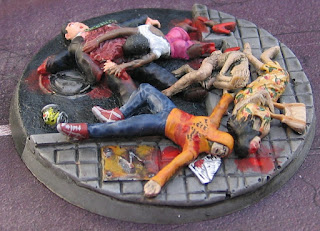 If you think that this is somewhat macabre then I agree completely.  My only defence is that this is no more associated with real life than is any zombie movie or book.
So, for bonus points, what happened here?  It looks as if someone with a gun shot down several zombies, maybe because they were feasting on the fat man.  But one of the models (centre) has no obvious injuries.  Is he/she dead?  Indeed, is he/she a zombie or a human?
Final thought: maybe Polly is feeling confident because she knows that she can kill any number of zombies; she may have been the cause of this massacre!  Just like swatting flies...
Follow me for Week 3 ==>
Posted by Colgar6 at 14:23