Back in December last, I showed some of my Studio Miniatures 28mm plastic zombies.  I also described a survivor that I'd converted from one of the same models.  Well, I've continued to experiment; here are 2 more survivors and a further zombie.

Scott was made from the body, head and left arm of a Studio plastic zombie.  The right arm and gun were spares from the Hasslefree "Kev" figure.  Because of the way that the gun arm was sculpted, I had to remodel the (plastic) supporting arm quite a bit to make things fit.  Indeed, Scott's left arm is a bit longer than his right arm - though this is only noticeable from certain viewing angles.

For Isaac, I only used  a body from the Studio plastic zombies.  The head, arms and weapon are spares from a set of Westwind bikers.  Again, the left arm had to be repositioned quite a bit to make it fit.  The added metal parts are clearly a bit chunkier than the plastic body, so Isaac looks rather top heavy. 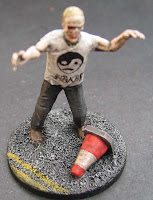 At the same time, I made another zombie as it was intended to be made!  This is a straightforward, Studio Miniatures, plastic zombie to help swell the ranks of my horde.  The traffic cone is scratch built. 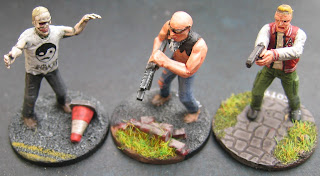 If you have a well-stocked spares box then it's obviously possible to convert the Studio Miniatures plastic zombies into something else.  Positioning arms for a 2-handed weapon (or a 1-handed item braced with the second hand) is a pain, in my experience.  If you're looking for an easier build then don't choose a 2-handed pose!  Also note that even though I have a reasonable amount of spares from other manufacturers, many of these parts just didn't look right.  Typically, spare metal parts will be too bulky for the more delicate Studio plastics.

My final thought: I've spent a lot of effort on these (bah!) but ended up with some unique models, very cheaply (yay!).  Of course, if I'd been just a little more patient then I believe that Wargames Factory are now about to ship or are already shipping a set of plastic, multi-part survivors.  Perhaps converting models like this is not needed after all...