Full Thrust: A Nest of Vipers!


In a remote part of the frontier, Orion pirates have taken over an old battle-station (Starbase 13) and are using it to refuel and repair their privateers.  They have been a considerable thorn in the flesh of the Federation; twice the sector admiral has attempted to retake the station, with disastrous results on both occasions (here and here).  However, the Federation are not the only government who have been stung by the Orion raids...

[I seem to be getting very forgetful these days.  Last week at the Helensburgh club night, I forgot to take my camera.  This week I had the camera, but had forgotten my Full Thrust event cards and all my explosion & missile markers.  Oh, well - those are optional anyway, so the game can go on without them.  Annoying, though.]

"Commander, there's an unidentified ship approaching the station at high speed.  Looks like an ore carrier or something like that."
"A single freighter?  Must be one of our prize crews; they may have forgotten to re-tune their ID signal.  Now stop worrying and don't disturb me again."
"Sir!  Multiple warp signatures, inbound!  Emergency - we're under attack!" 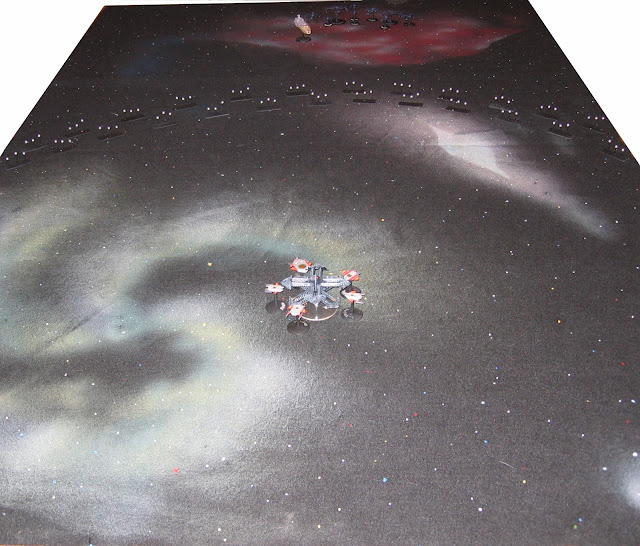 Place an Orion starbase 18" from one end of the table.  It is surrounded by a thick ring of mines, 24" away from the station.

All the ships in the Orion fleet are docked at the base.  Until they undock, they cannot use any of their own weapons or launch any fighters.

The Klingon fleet arrives from the far end of the table at any desired speed up to 10.  The attackers don't have any minesweepers, but the resourceful admiral has commandeered a large freighter.  He/she may use this to force passage through the minefield or it may be filled with marines and used in an attempt to capture the base (good luck with that!).

We played with roughly the following size of forces:

The Orions are partying hard, as many of their raiders have returned from successful forays at the same time.  Consequently, they aren't as alert as they might be and are relying on their passive defences (minefield) more than they should be.
Every Orion ship and each sector of the starbase must track readiness for each of the following items that are fitted to that ship/sector.  At the start of every turn, throw a dice for each item on each ship; on a '6' the preparedness advances to the next level:

The starbase rotates 90 degrees clockwise at the end of every turn.

This game is heavily weighted in the attacker's favour, due to the large element of surprise.  So, the Klingons must capture or destroy every Orion ship and the starbase.  None shall escape!  Any other result is an Orion Victory.

For a variant, the Orions could improve their readiness on a 5 or 6 (rather than just a 6) and then victory would be determined by a straight comparison of points value destroyed or captured by the end of the game.

How it played for us 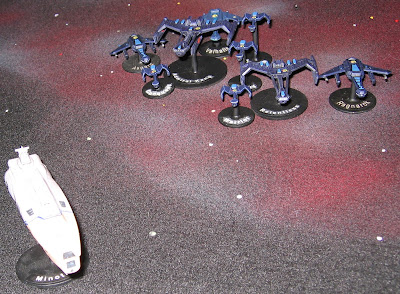 The Klingon fleet approached rapidly, in tight formation.  They had sent the Minotaur (bulk freighter) on ahead with controls locked; the intent was that she would enter the minefield obliquely and thereby cut a wide hole in it through which the fleet would pass. 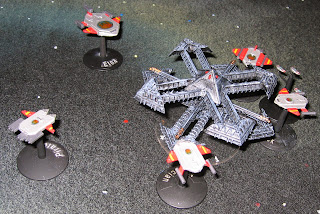 Consternation and confusion reigned on the Orion side as crews raced for their ships and tried to find their missing officers.  The corvette Pirate was more alert than most; she undocked from Starbase-13 and started to power up her weapons.  Slightly later, the cruiser Etna pulled away from the station on impulse power, but all her other systems were down.

Quadrant-3 of the starbase reacted much more swiftly than the remaining Orion forces; its big weapons were activated just as the station's rotation turned the quadrant away from the attacking fleet.  They did manage to launch a squadron of fighters, though. 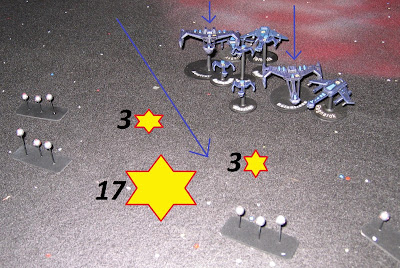 The commandeered freighter Minotaur hit the minefield and the Klingons were delighted when she only took 3 points of damage from the first and second clusters of bombs.  This would be easy!  Their joy turned quickly to horror as the third part of the barrage scored a whopping 17 hits.  When the sensors had settled down again and the debris had cleared, it became obvious that the Minotaur had been destroyed before hitting the fourth and final set of mines. 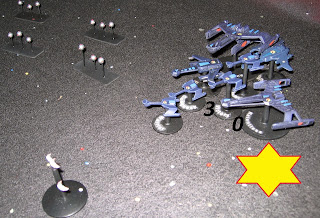 Captains cursed and helmsmen sweated as the port half of the Klingon fleet turned even closer to the other ships.  The battlecruiser Relentless and the frigate Victory couldn't quite make it past the mines, though; these detonated with a spectacular "fut!", scoring minor damage to the frigate and none at all to the larger vessel.  Even as the first squadron of Orion fighters approached, the fleet was through the gap and racing towards the shocked defenders! 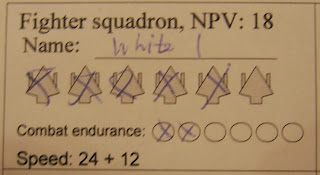 White squadron attempted to slow down the Klingons by making an attack run on the Admiral Kang.  However, the flagship's gunners were ready for action and jubilantly shot down 5 of the 6 fighters.

One of the Orion players commented, wistfully "It would be nice if the last pilot was Luke Skywalker".  He wasn't; the lone fighter achieved nothing against the enemy battleship... 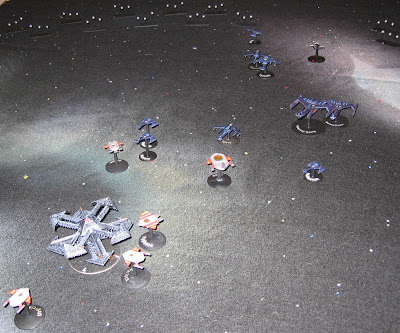 Another set of Orion fighters (Red squadron) was launched.  It also made a firing pass on one of the Klingon capital ships, but again without much success.

By now, the Klingon fleet was charging forward.  The battleship Admiral Kang and the battlecruiser Relentless kept close together and concentrated their fire on the starbase.  Phasers did a moderate amount of damage, but almost all of the ships' disruptors missed.  Meanwhile, the cruisers and frigates split off to hunt down the few Orion ships which had managed to undock. 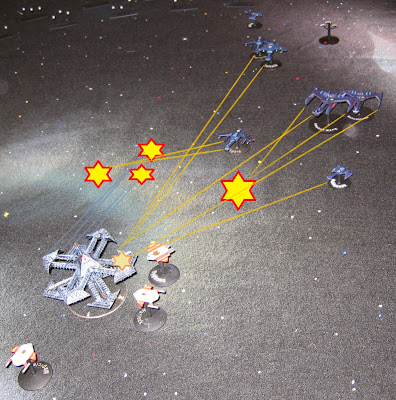 As the Orion battlestation rotated, the fully active quadrant-3 was able to open fire.  It could only bring weapons to bear on 2 over-eager Klingon frigates this turn, so these bore the brunt of the Orion's frustrations and were vapourised.  One of these ships took twice as many hits as were needed to kill it; the crew never even realised they were dead until they arrived in Sto'Vo'Kor to begin their afterlife.

In retaliation, the Klingon warships fired on and destroyed the plucky Orion corvette Pirate and the struggling cruiser Etna; neither ship had much chance against the weight of fire-power directed against them.

Due to some navigational errors, the Klingon frigate Warrior ended up well out of the fight, heading back towards the minefield.  On the Admiral Kang, the flag captain's staff noted this apparent dereliction of duty but were too busy to take action immediately.  Once the battle was over, the captain of the Warrior would probably be reassigned to some awful cargo run, I suspect... 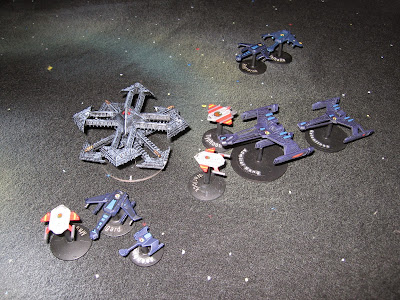 In the final turn of the game, before we ran out of time, the Klingon fleet reached point blank range to the starbase.  Even as Quadrant-2 started powering up its heavy weapons, the Admiral Kang and the Relentless pounded it mercilessly with phasers (all disruptors missed, again!), inflicting heavy damage and knocking out both torpedo launchers.  In return, the fully active Quadrant-3 was rotated towards the attackers and it lashed out at the Klingon battleship.  The Admiral Kang was forced to take a threshold check, but luckily (for her!) only lost her warp drive and a single disruptor.

At this point, we had to pack the game away.  What might have happened next, if we had more time to play on?

The Klingon warships would have overshot the starbase quite dramatically, given the speed at which they were travelling.  This is especially true for the 2 capital ships, which weren't quite as nimble as the cruisers.

Had they been able to trade blows with Quadrant-3 for one turn from their current position, they would then have been faced by the useless and totally inactive Quadrant-4 (I guess that's where the party was being held!)  If this had happened then the massed Klingon fire-power should have reduced the base to rubble quite rapidly, though probably not without taking a few hits themselves.

As it was, it would be a race between the fleet slowing down and turning round, versus the remainder of the starbase (especially Quadrant-1 and Quadrant-4) remembering where they had left their weapon-arming codes and/or finding someone sober enough to man their tactical consoles!  When/if the battlestation woke up properly, the attackers would have taken some real damage.

The few, remaining Orion ships were toast, really.  Their chances of disengaging from the station and then escaping before being picked off were slim, I think.

Finally, I suspect that the Klingon admiral will dispatch a task force to hunt down that Ferengi trader who sold him all those "advanced" disruptor targeting controls, in order to negotiate a refund!