Wound Cards for "The Rules With No Name"

Every time we play The Rules With No Name, we have difficulty tracking the effects of injury to those gunslingers who are unfortunate enough to be shot.  The data for the effect of each wound is all there, but it's embedded within the various tables and charts, or sometimes in the body text of the rules.  This makes it difficult to remember which modifiers apply to each test.

In the past, I had a bunch of small, paper slips printed, each with the effect of a single wound.  However, these were not ideal because:

After gaining some experience with this earlier method of tracking wounds, I decided to design a deck of "wound" cards instead.  This article describes my new approach. 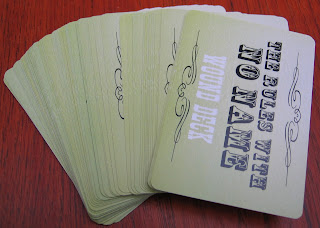 The idea behind these is very straightforward: when your character is shot, draw a card and keep the card to remind you of the effects.  Simple, yes?

OK, this needs a little more description, I think:

For my own reference, as well as for anyone else who is interested in getting hold of a set of these cards, they can be found here.

[Edit: I've uploaded the original PowerPoint source file here, if anyone prefers that instead].
Posted by Colgar6 at 15:22

Email ThisBlogThis!Share to TwitterShare to FacebookShare to Pinterest
Labels: Cards, The Rules with No Name