HOTT: One of our Santas is Missing 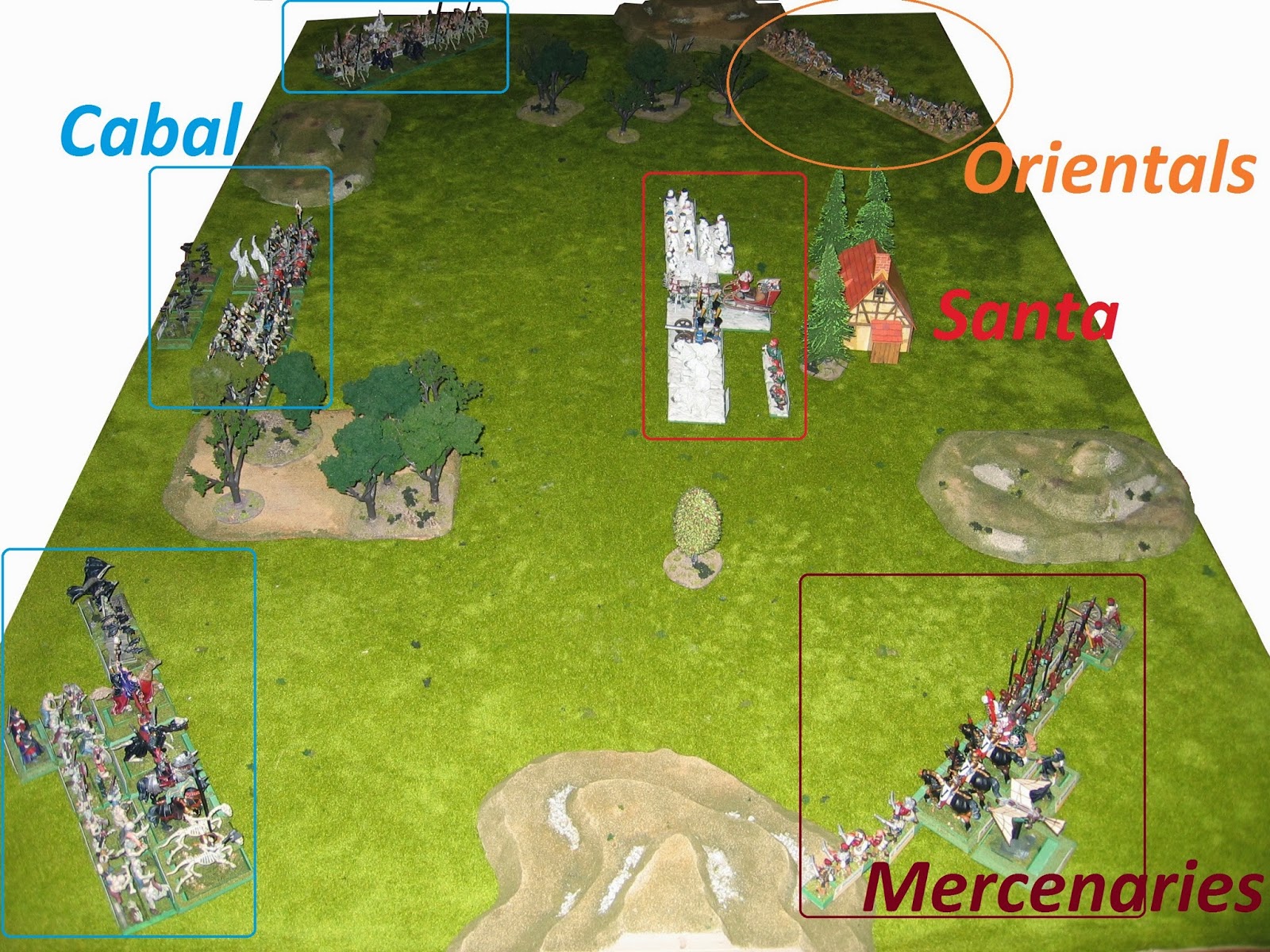 In the last club night before Christmas, I always bring out my special army for a big game of Hordes of the Things.  This year, Santa and his helpers were under siege from the forces of darkness!  From the west, the massive undead armies of the Cabal of the Black Hand approached his hideaway, intent on destroying this beacon of goodness once and for all.

However, it wouldn't be as easy as the chief necromancer hoped. Santa had friends (?!) to help defend the spirit of Christmas.  From the east came hordes of Oriental workers, reluctant to see a good source of income overthrown.  From the south, a band of mercenaries approached, attracted by the promise of the endless profit to be had from the man in red.

This was a straightforward big-battle game of Hordes of the Things, with no special rules or scenario (because I couldn't think of anything in time).  There are 3x24AP armies on each side.

The 3 undead armies of the Cabal (on the left of the picture) are lead by magician generals and consist of the usual hordes of skeletons, zombies &c, with a mixture of bats, riders, sneakers and a few other troop types to pad them out.

The other 3 armies are all quite distinct!  To the north, the Kung Fu army is made up of several heroes, some infantry and hordes of peasants.  In the middle, Santa's army has ice bears, elves with guns, snowmen and a toy soldier cannon.  To the south, the mercenaries have a decent block of spears, some crossbowmen, a few knights, a pair of duellist assassins and a strange flying machine. 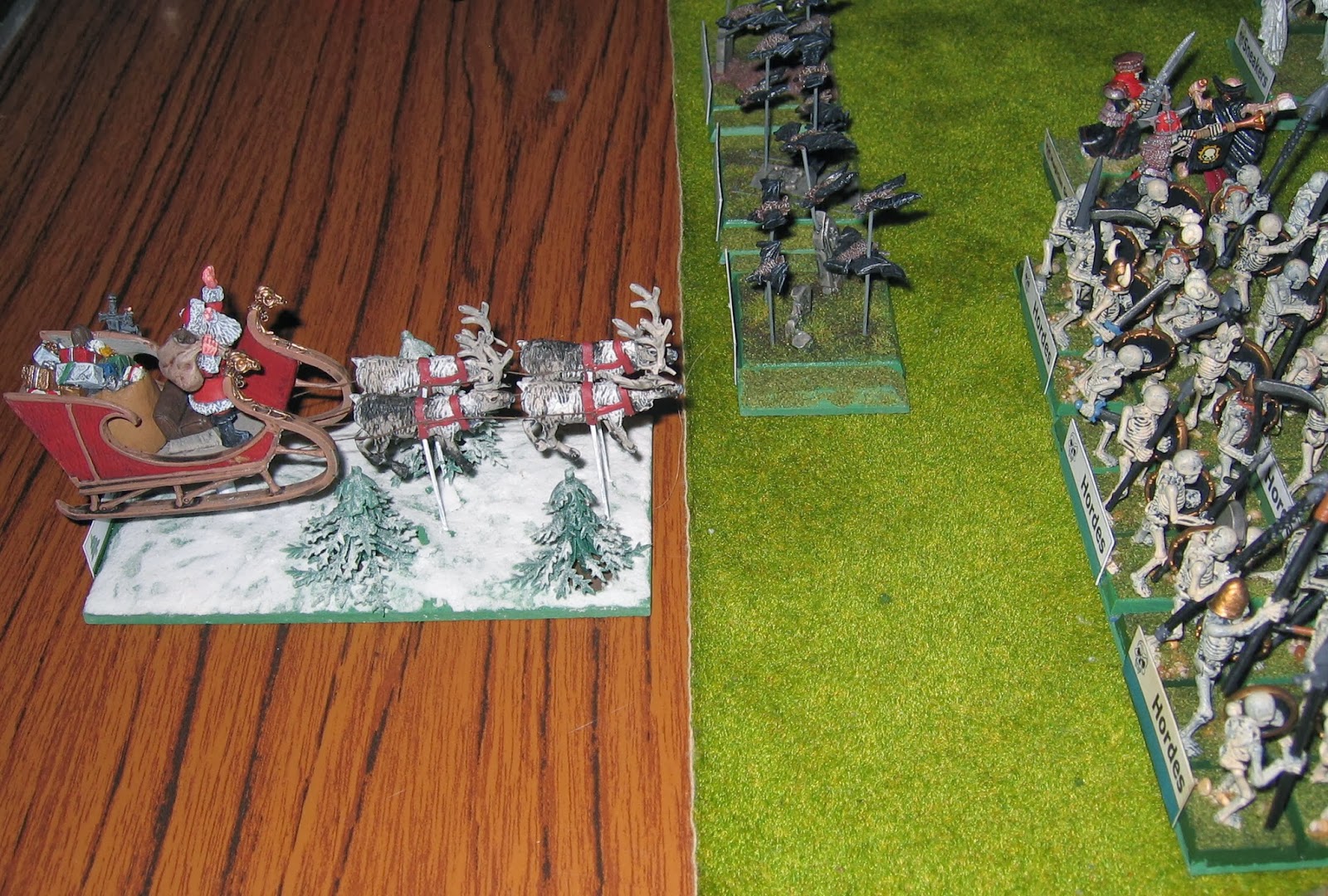 In the very first turn, the necromancer in the centre tried a speculative spell at the opposing general.  His illusion of a little boy dying from leukaemia drew the kind-hearted old gent into a trap.  Santa was captured and led away in chains before he realised what was happening [the necromancer needed to beat Santa in an opposed dice roll by 3 or more points, which he did...].  Big Man Down! 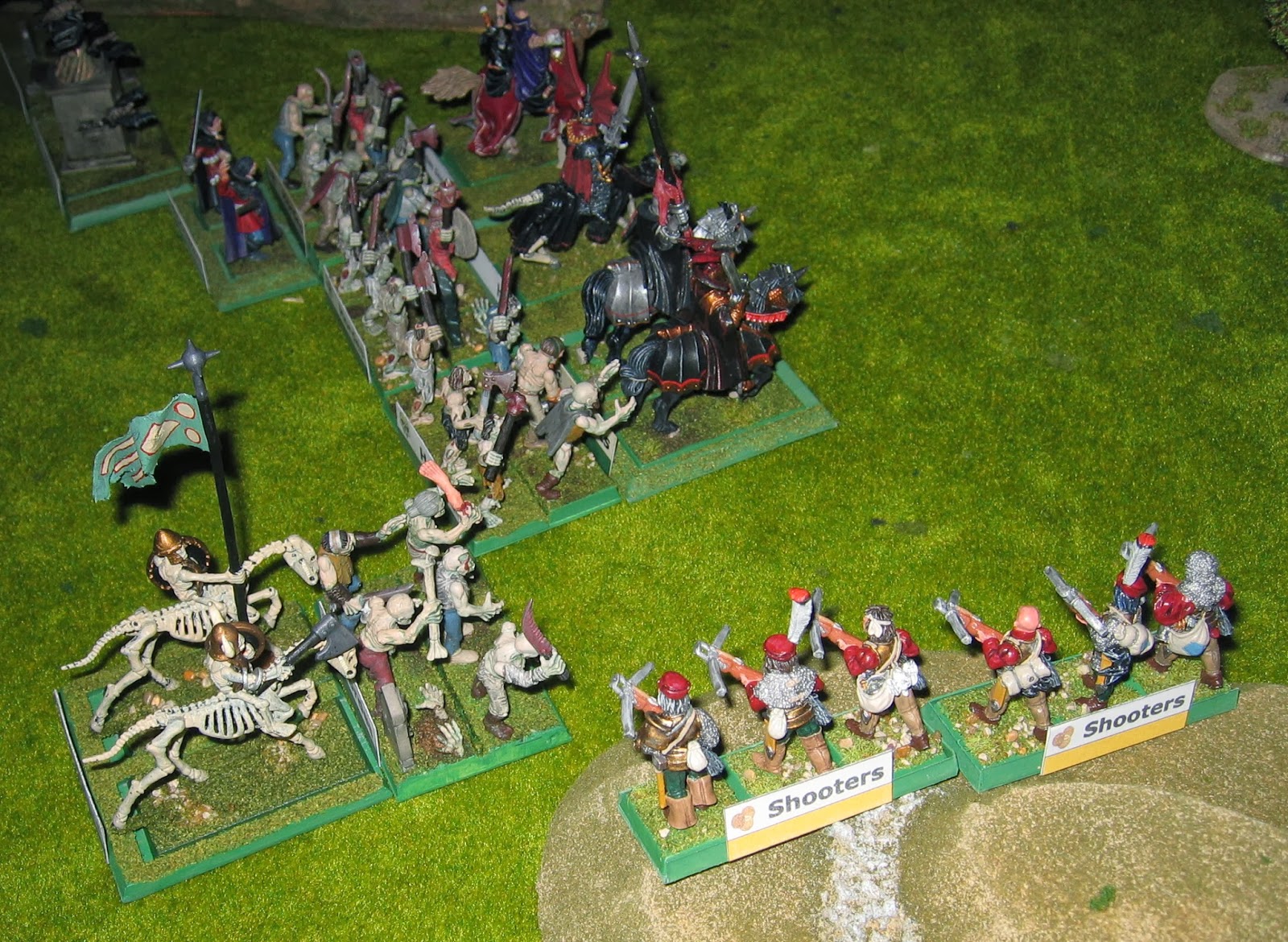 To the south, the mercenary crossbowmen quickly climbed the hill to their front.  From their, they showered bolts onto the undead forces, causing them considerable disruption. 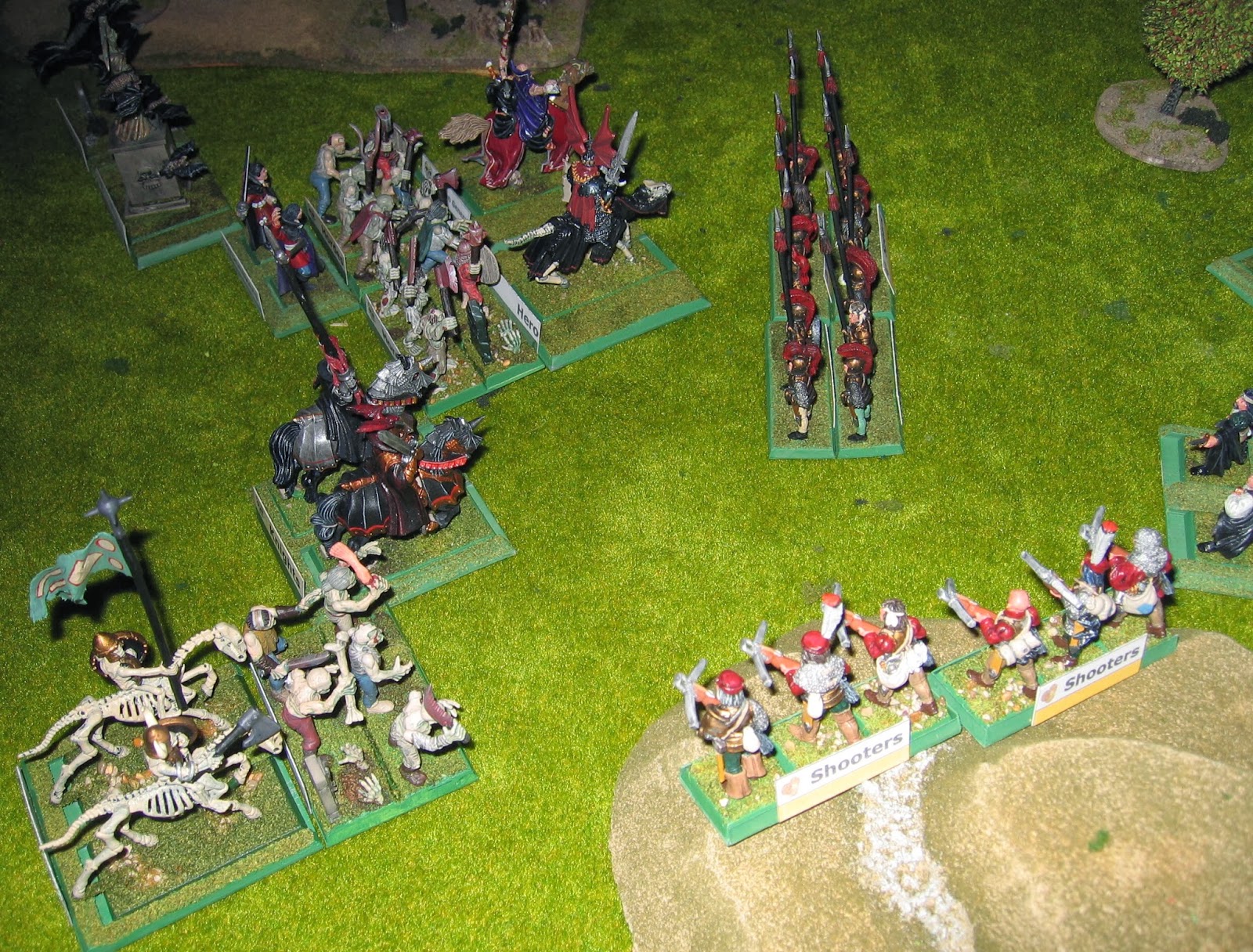 They were soon joined by the mercenary spearmen, who marched rapidly to block the gap between hill and forest.  This penned in the Cabal's entire southern force very effectively. 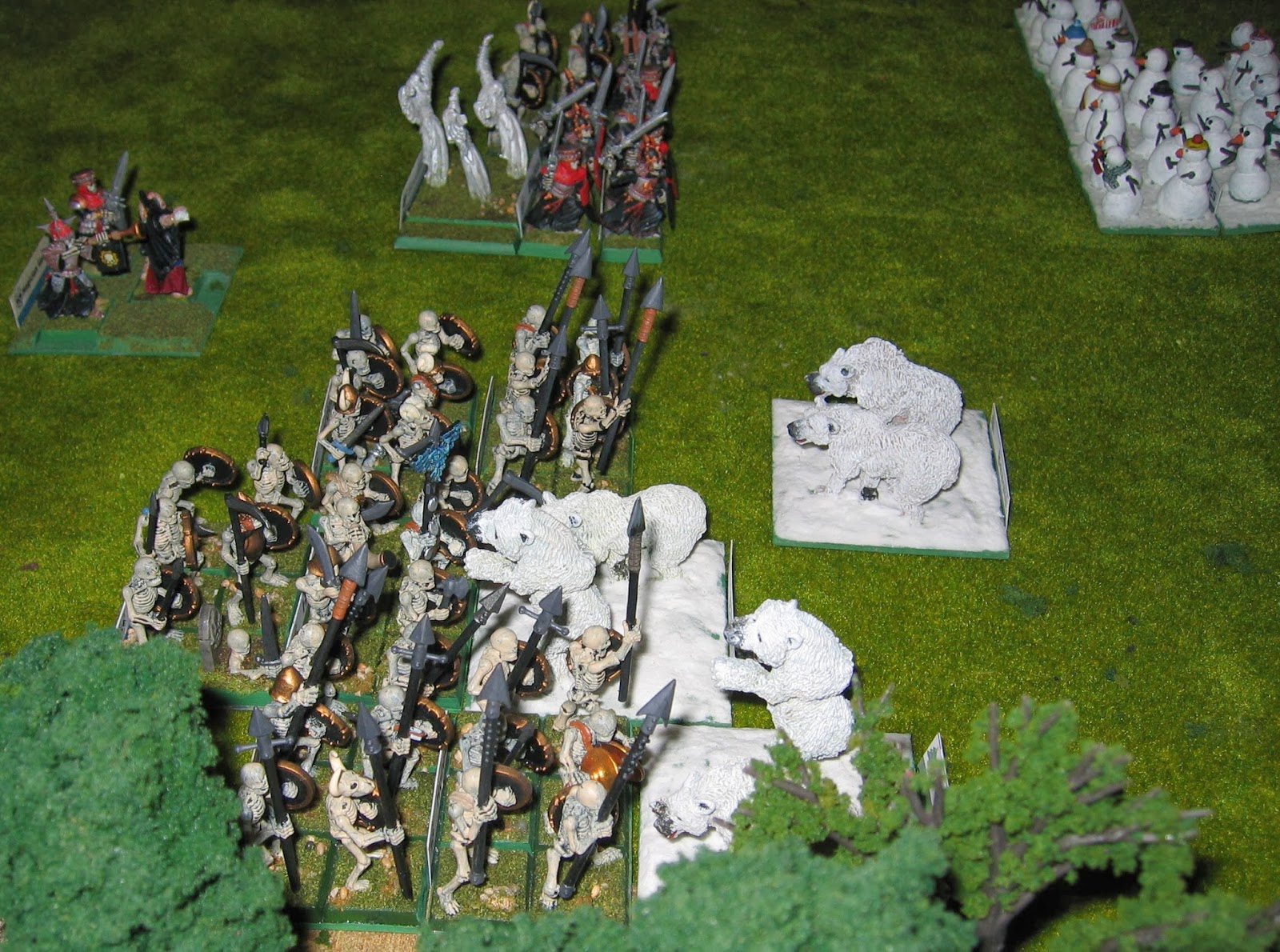 Santa's ice bears charged forward and crashed into the huge horde of skeleton warriors in the centre.  It was slow work, but the beasts gradually ground most of the undead warriors into dust. The Kung Fu army marched forward slowly through the northern woods.  Their general was ambushed by sneakers and lurkers at the same time [I don't think I've ever seen anything quite like this happen before], but Chinese heroes aren't afraid of ghosts and the evil spirits were quickly dispersed.  It took a little longer to deal with the ghouls behind them, though.  The rest of the Kung Fu army had to leave their general behind while their advance continued. 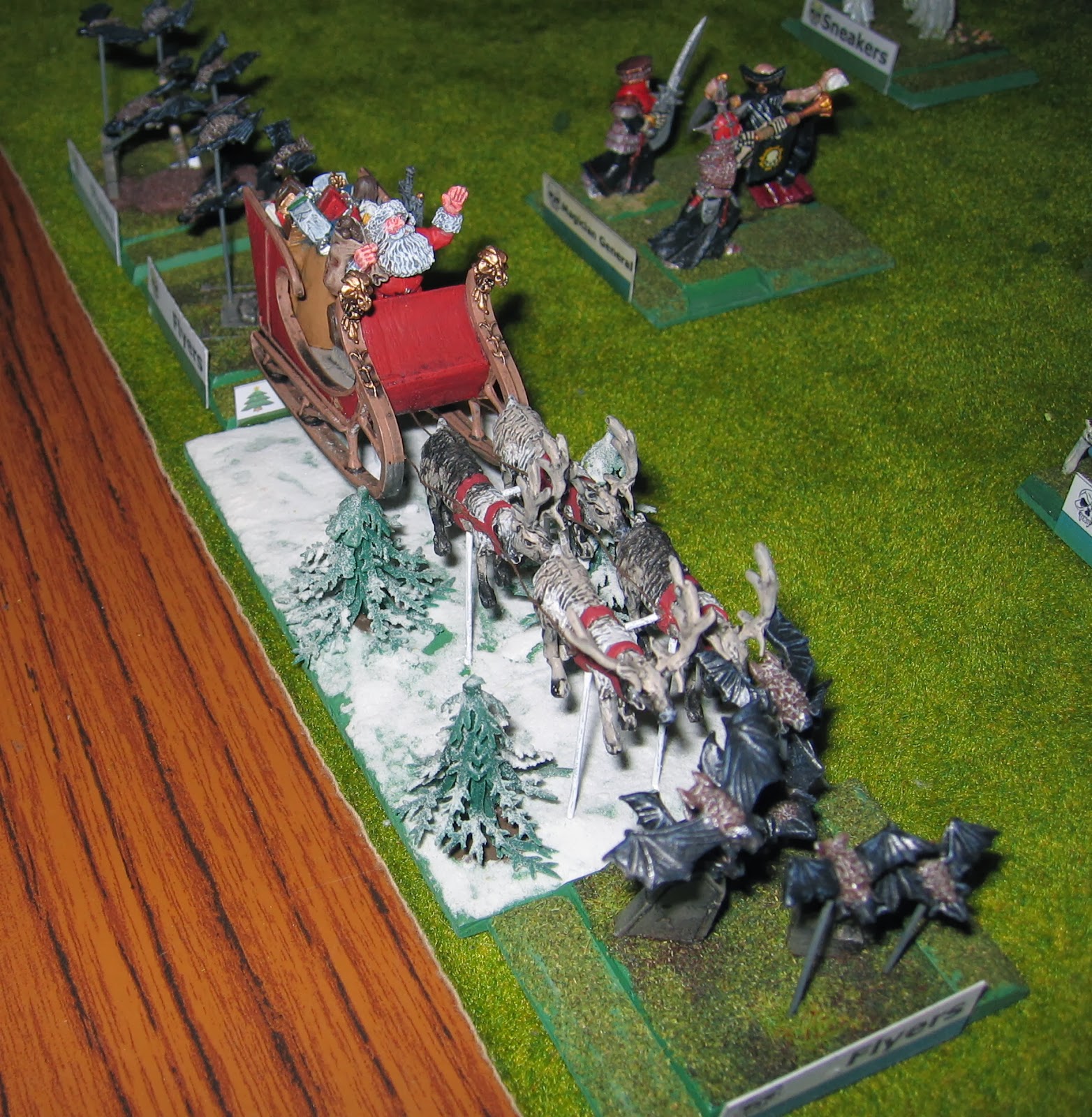 Then, with a jovial "Ho Ho Ho!", Santa broke his bonds and escaped from his captors!  His sleigh flew straight at the Cabal's bat swarms; the first one was easily isolated and pulverised. 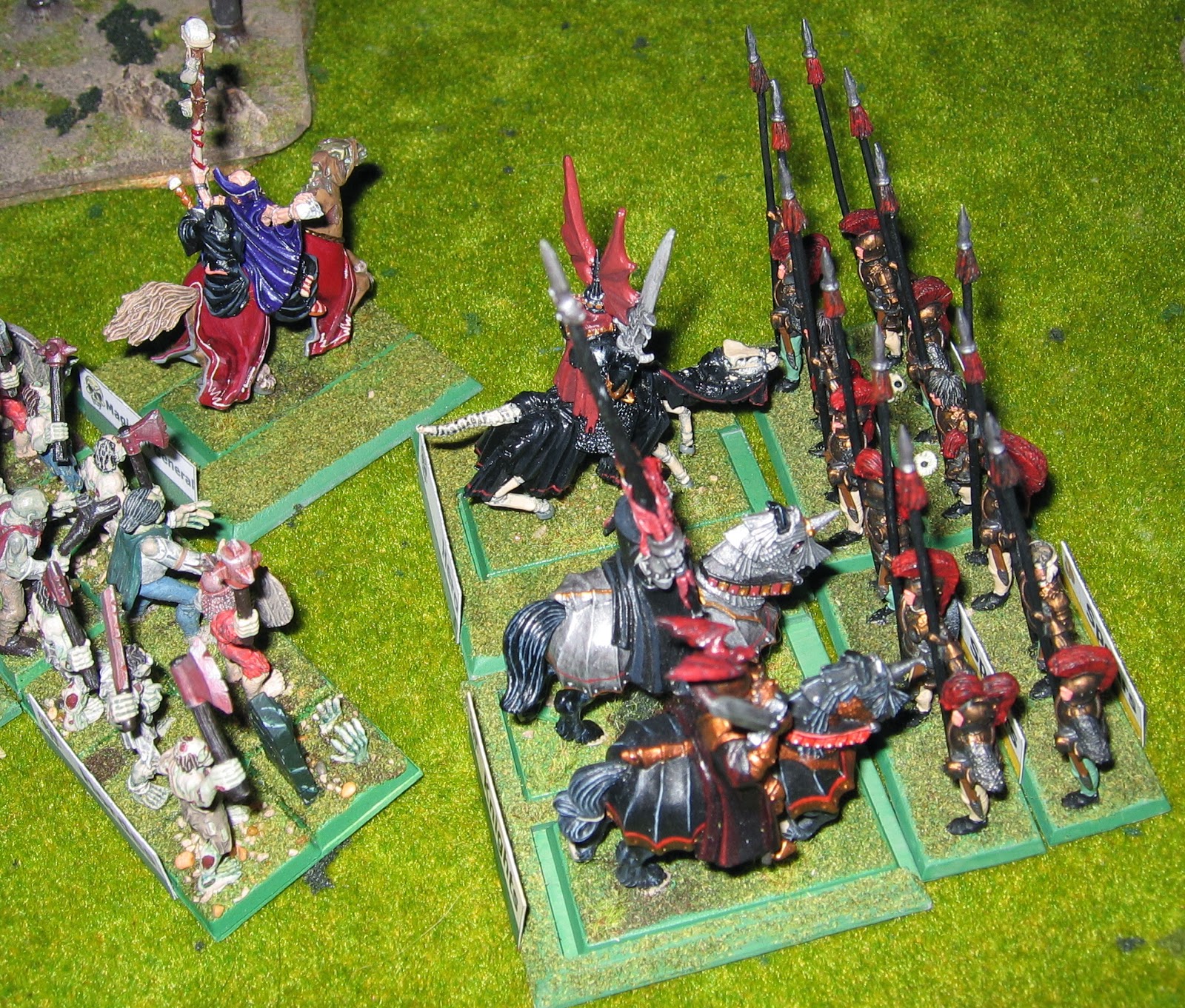 In the south, the undead general sent his hero and knights to try to clear a path through the mercenary spearmen.  Because of the confined space, neither had any room to retreat and this turned out to be a fatal mistake.  Both undead mounted units were destroyed by the relentless ranks of pikemen. 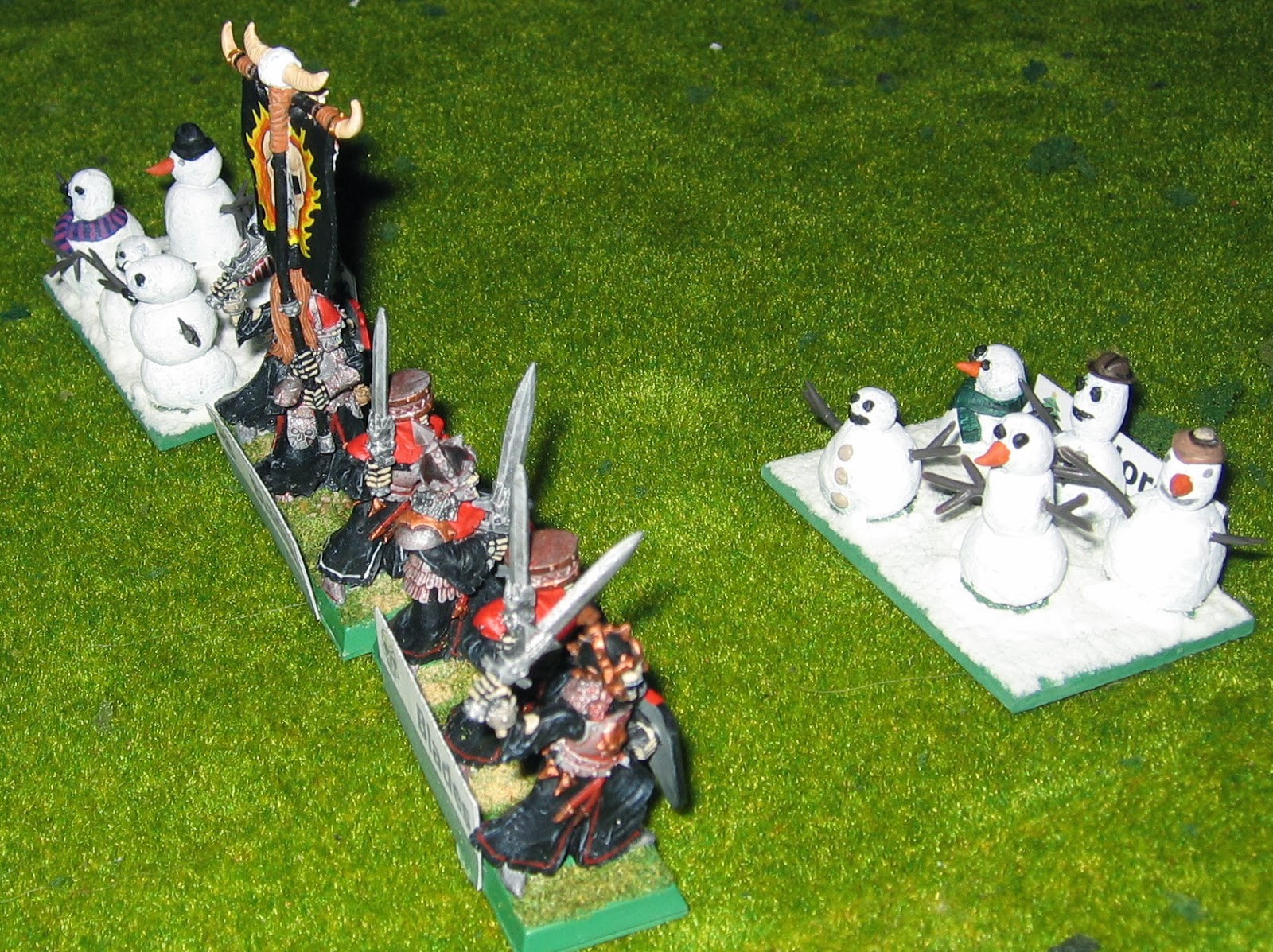 Finally there was some good news for the Cabal as the Grave Guard engaged the snowmen.  The elite undead bladesmen quickly destroyed 3 out of the 5 bases, taking brightly-coloured hats and scarves as trophies to add to their war banner. 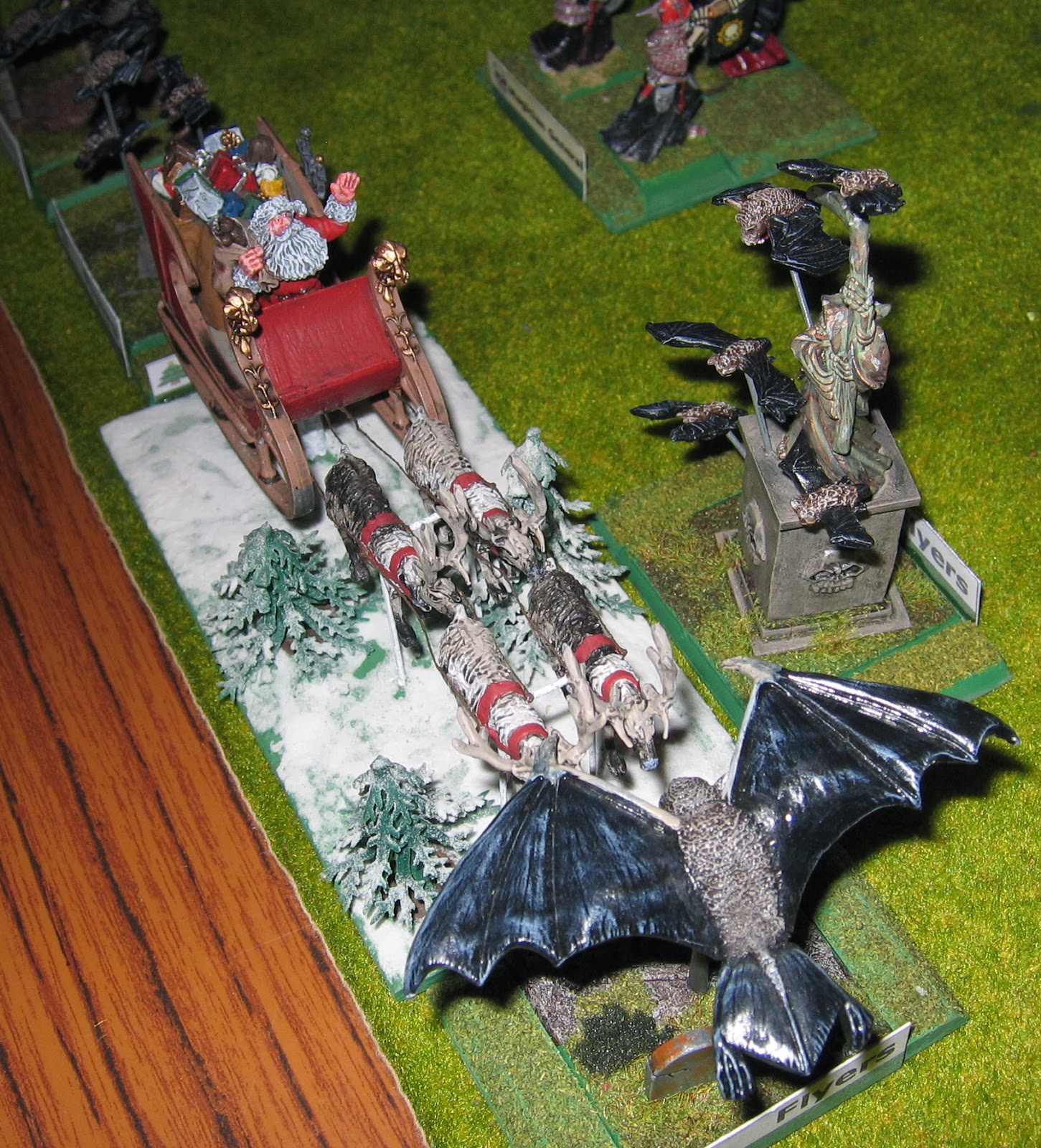 Santa may have escaped from his imprisonment, but he wasn't clear yet.  The Cabal's flocks of bats swarmed all around him and one particularly huge flyer attacked the reindeer who drew the sleigh.  Even though he was surrounded, Santa still wasn't worried [Aerial Hero General: +6 (though penalised -2 for flank and rear attacks), Flyer: +2 combat factor].  After all, to win the big bat needed to roll 3 better than he did.  This just wasn't Santa's day though: he threw low and the enemy rolled high.  The sleigh and its occupant and contents crashed to the ground and disappeared into the snow. 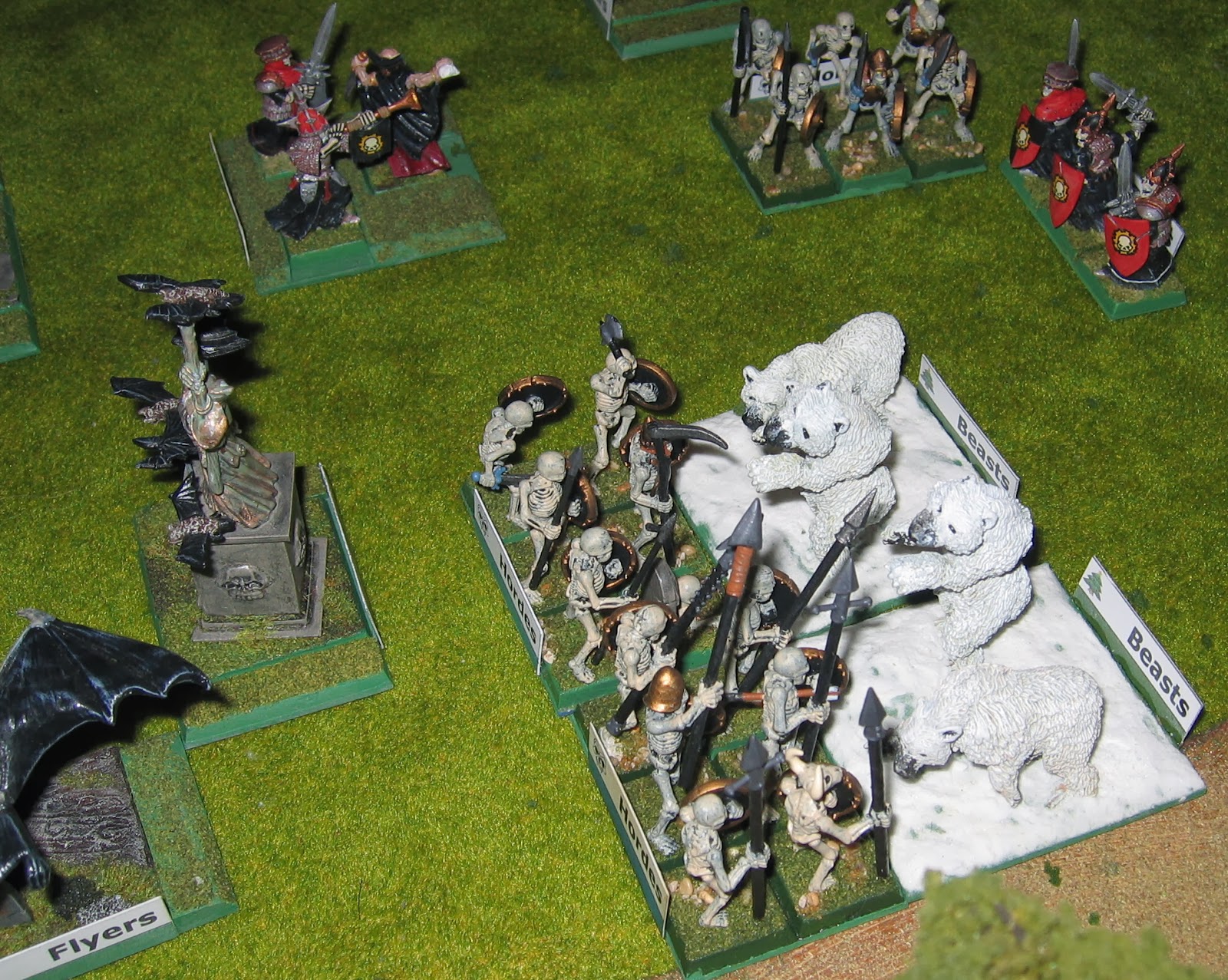 Simultaneously, one of the 3 stands of ice bears who were trying to break through and rescue their chief was also lost.  Along with the snowmen casualties, this took the central good army perilously close to collapse. 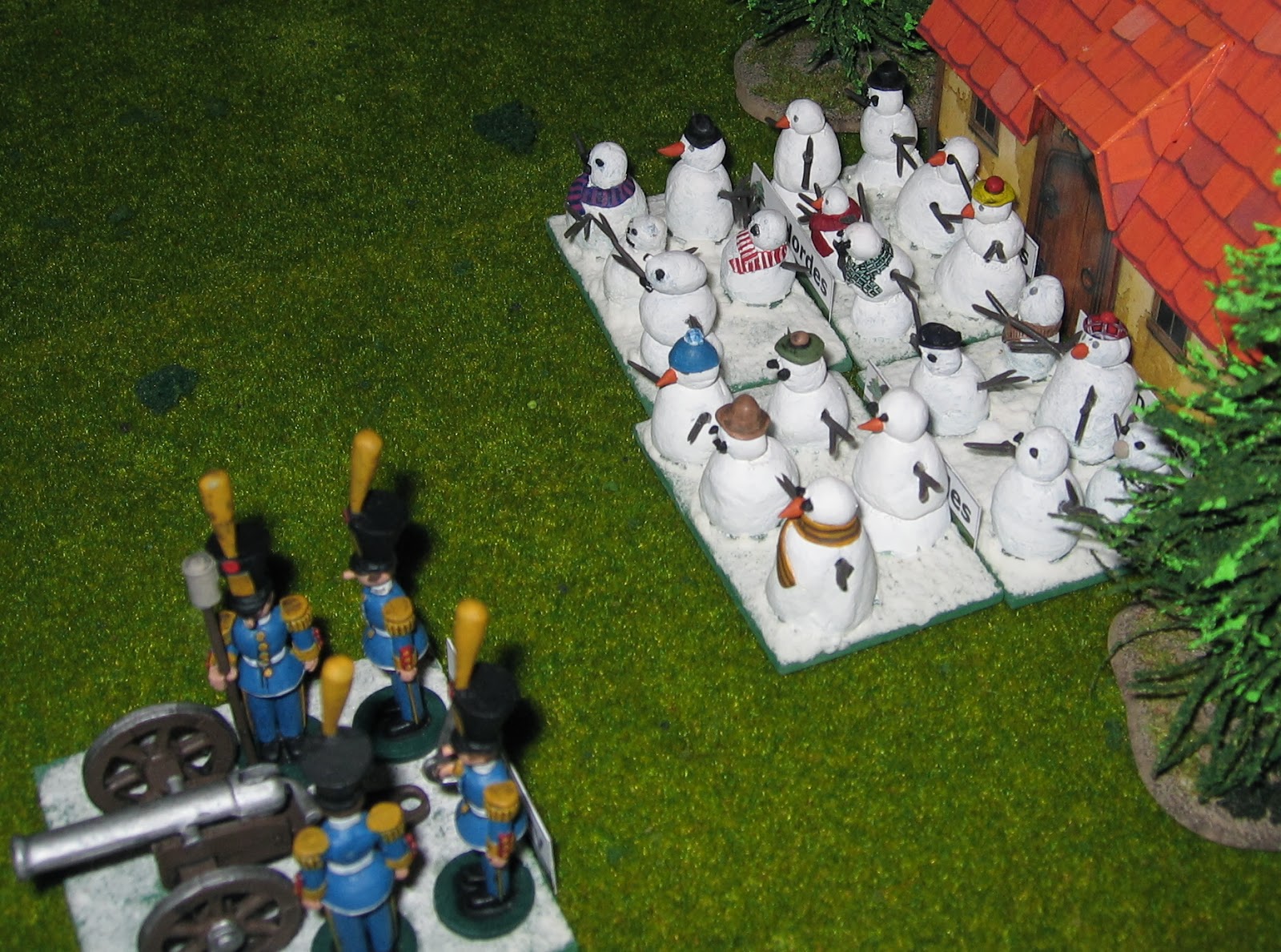 More snowmen were built in a hurry, but this only stemmed the tide briefly as more ice bears were lost. 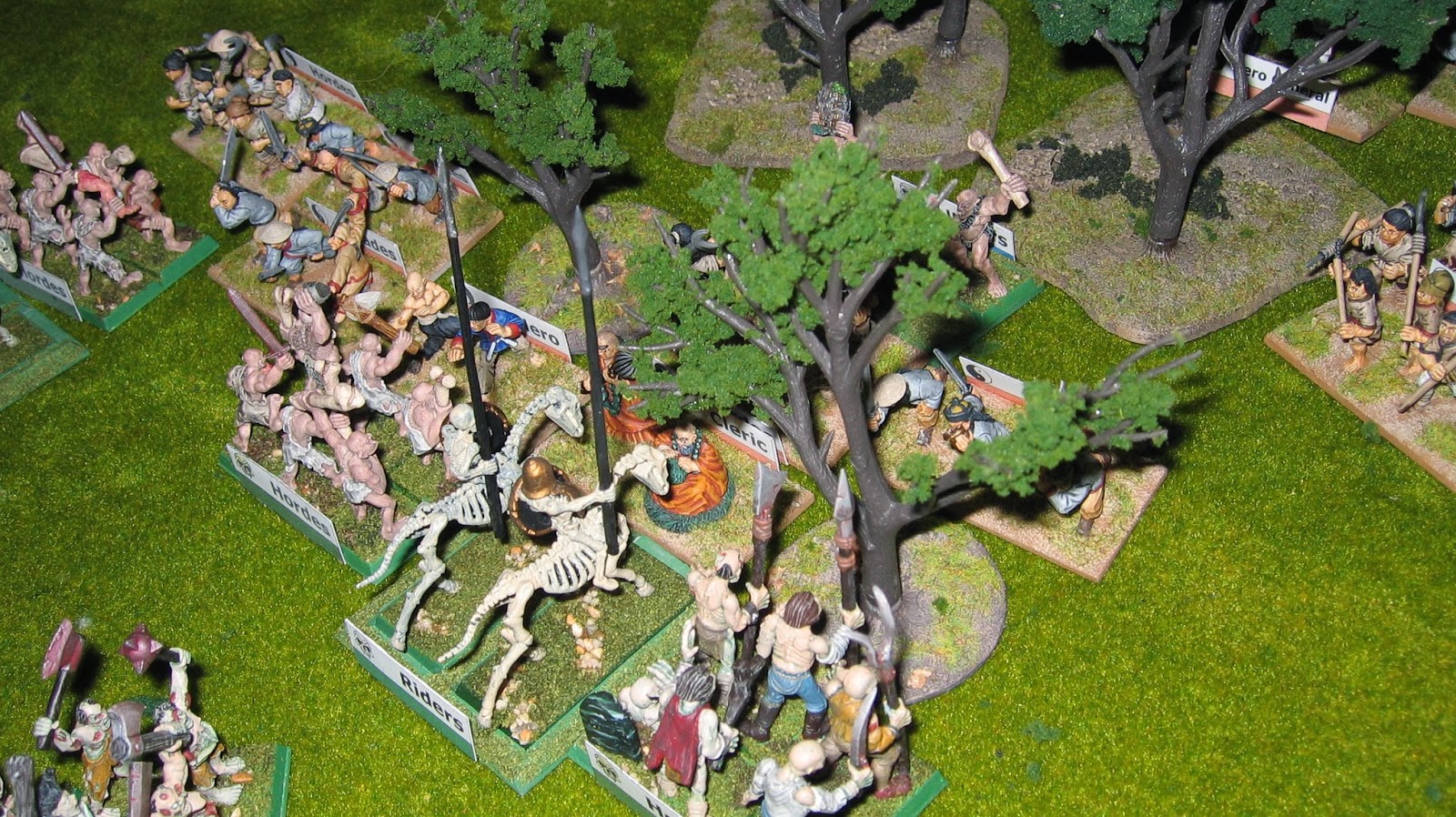 To the north, the first part of the Kung Fu army finally cleared the forest.  They were immediately attacked by skeleton horsemen and zombies, but the oriental warriors were fighting fit and destroyed all who stood in their way. 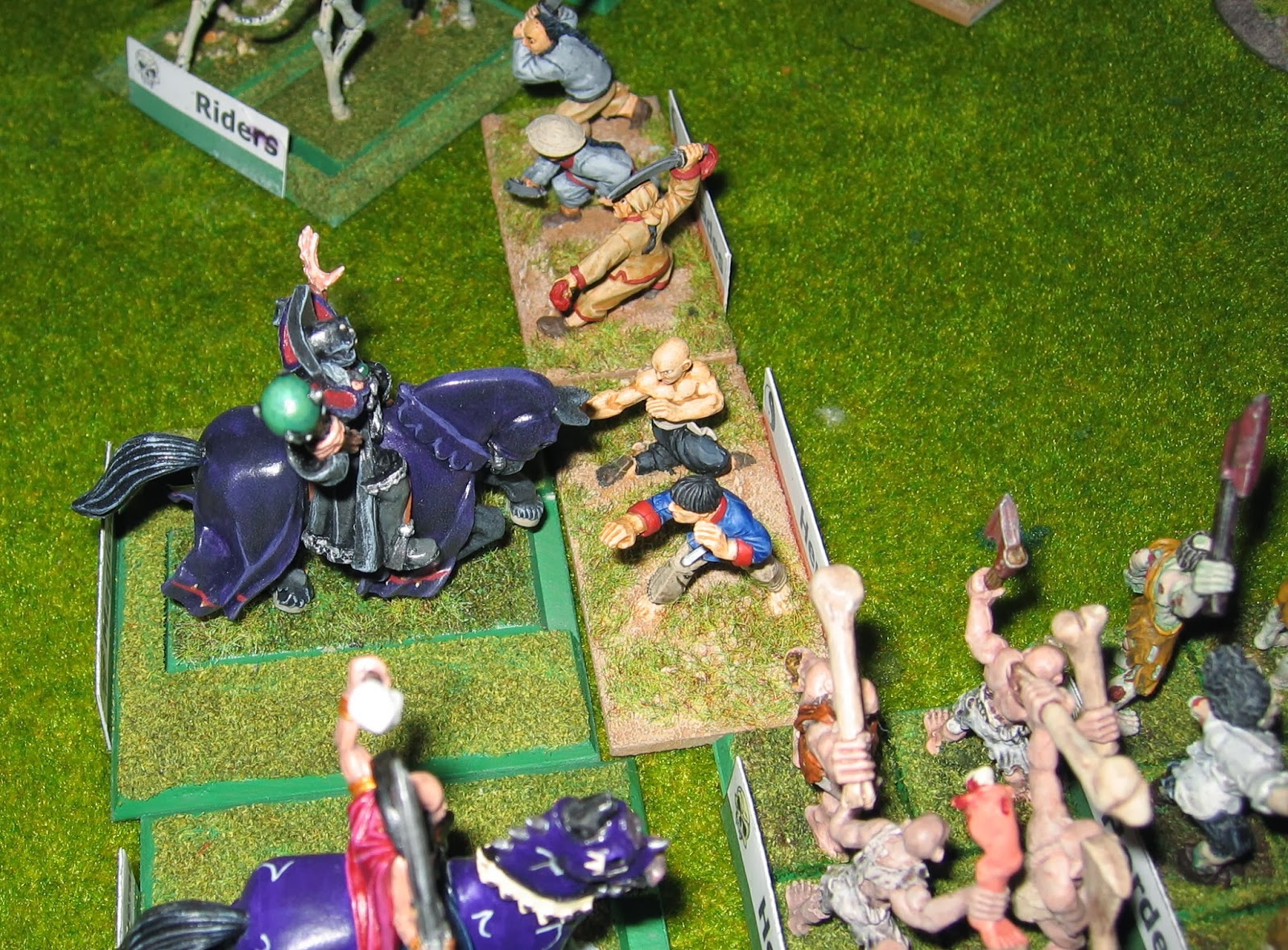 The minor Kung Fu hero thought he saw an opportunity to kill the assistant magician and charged forward.  However, the easterner was outclassed by the undead wizard and was promptly ensnared by foul spells. 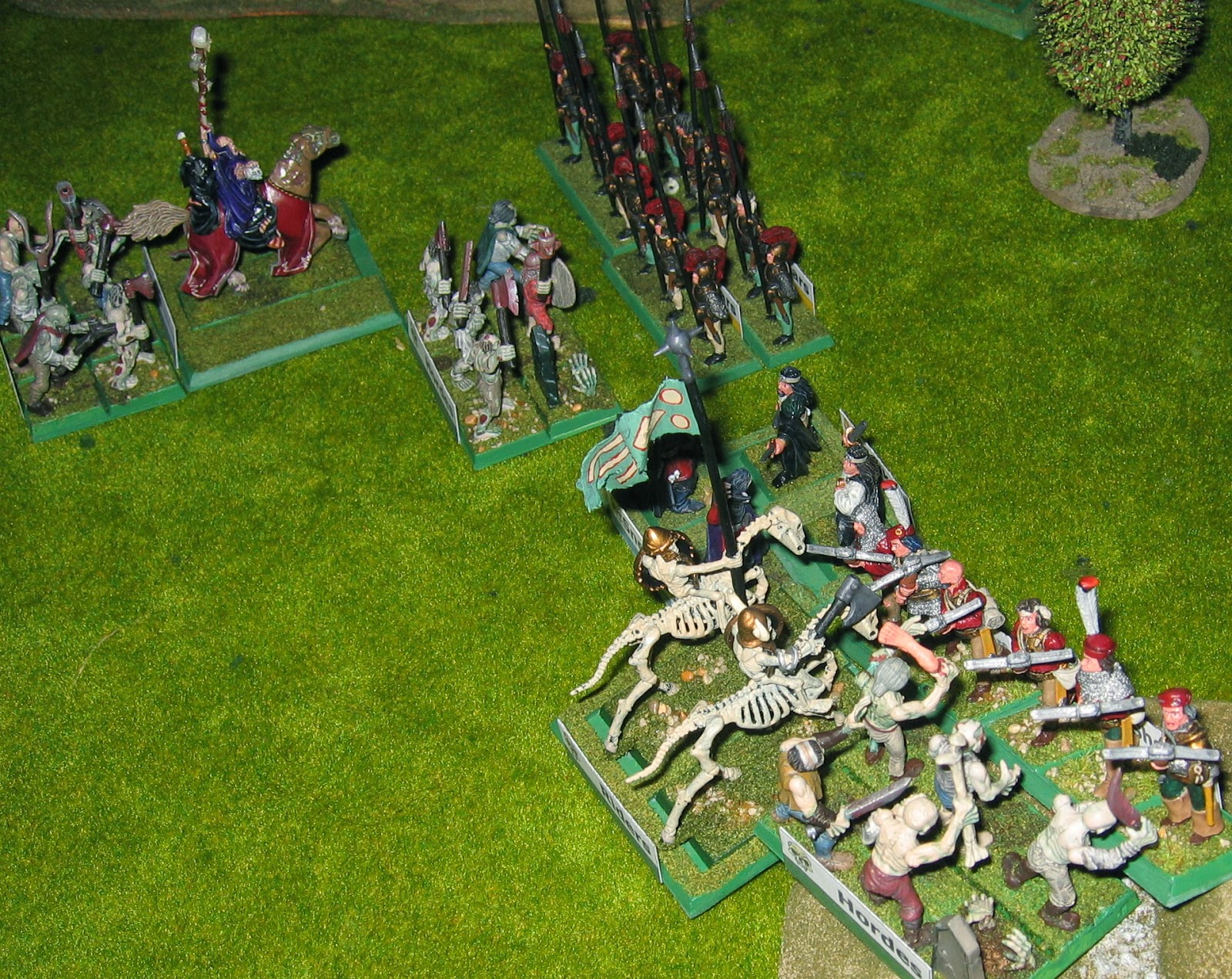 In the south, the Cabal attacked with everything they could in a fruitless attempt to shift the mercenary infantry.  This even resulted in the undead (vampire) sneakers attacking the mercenaries (duellist) sneakers - another first for me in Hordes of the Things.  Inspired by the stout resistance of the other humans, the duellists saw off the vampires, who then fled off the table! 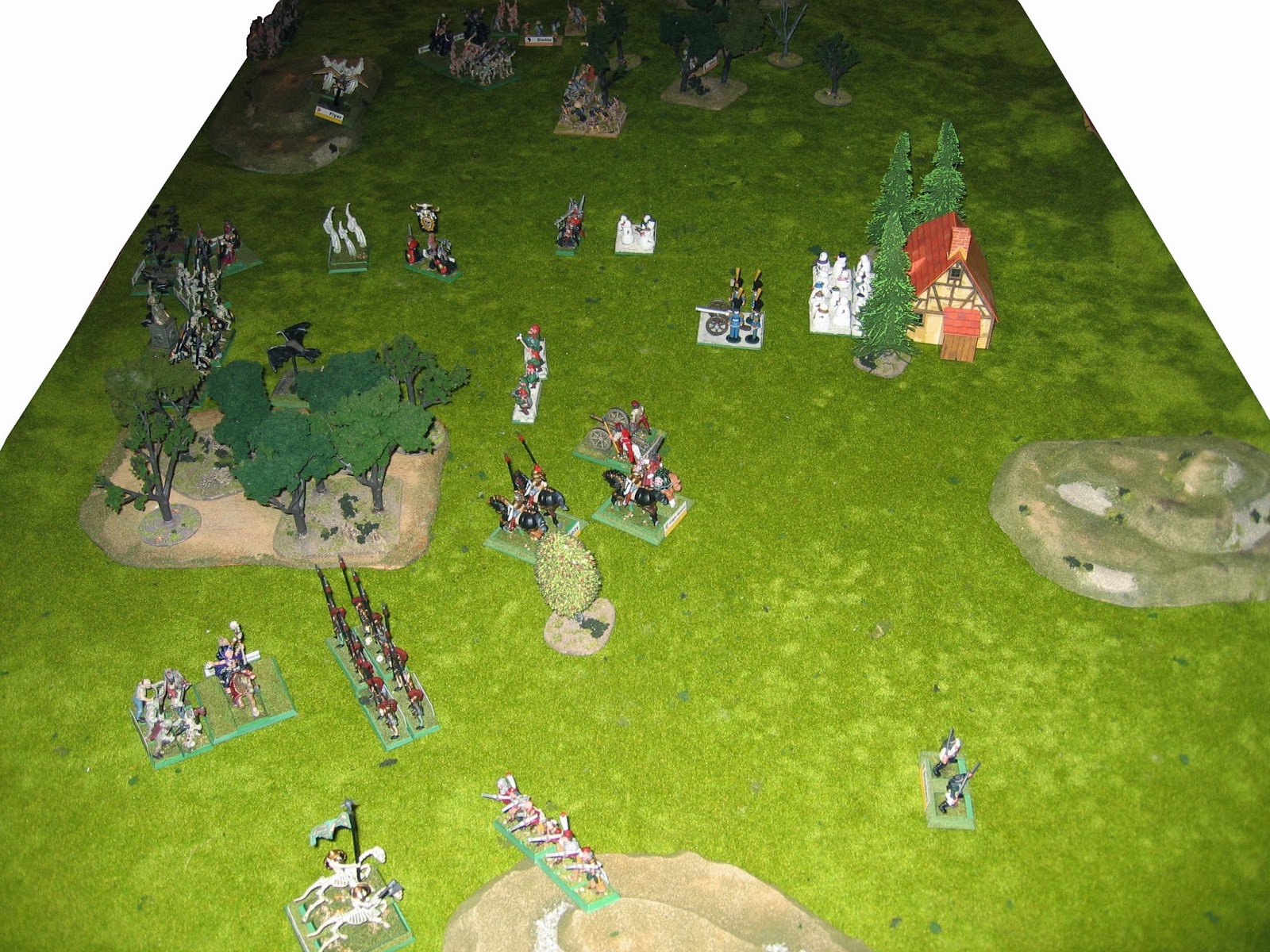 Finally, the last of the ice bears was surrounded and killed; Santa's army collapsed and routed.  This happened just as we reached the end of our slot in the hall.  By this time, the various armies were considerably scattered and had little sense of organisation!

So, who won?  Losing Santa himself and the rest of his army as well was a terrible blow to the forces of Christmas.  However, all was not lost as each of the undead armies was badly damaged [from memory, they had lost 9, 7 and 7 points respectively - out of the 12 needed to demoralise them].  In contrast, the living side may have lost one complete army but the Kung Fu force had only lost 2 peasants and a captured hero: theoretically all of these could return to the fight.  The mercenaries hadn't lost anything at all, despite being heavily engaged.  That being so, I think that this battle was a clear win for the orientals and the mercenaries, though something of a drubbing for the traditional Christmas!