Black Powder: The Bridges over the Traisen (1812)

These days, I don't play many historical games at the Helensburgh Games Club.  However, occasionally my friend Steve and I play a game of Black Powder with our 6mm Napoleonic armies.  This is, to me, the best scale with which to depict large horse & musket battles.  I think it gives a much better impression of the huge numbers of men and horses that would have been involved (though we all know that even 6mm figures aren't going to represent a division at 1:1, let alone an entire army corps or bigger).  See what you think...

Recently, Steve sent me a whole load more Austrian infantry (see here), so I was eager to try out my reinvigorated forces.  I had my chance last weekend... Somewhere in eastern Europe and sometime between 1809 and 1812, the Russian and Austrian empires are at war [note that this isn't totally impossible.  Although both these countries usually fought against the French, a weak and reluctant Austria did send an army corps to help Napoleon's 1812 invasion of Russia]. On this hypothetical occasion, a division from each army were racing to secure the crossings over the river Traisen, either to make it easier for following troops to cross or to allow engineers time to demolish the bridges.

This would be a simple encounter battle but with a slight twist.  Each side would approach from one side of the river; victory would be determined by counting the number of bases of troops that were on the far side when the game ended.

The river could be crossed at any one of 4 bridges by a unit that was in column of march [good luck doing that if opposed].  Also, it's possible that the Traisen could be forded.  The section of river with the island is automatically deemed to be fordable.  The status of each of the other 4 sections can only be determined when a unit reaches the river bank at that point.  A roll of 5 or 6 then indicates that the section is fordable.

A fordable river section may be crossed by any unit at half speed.  If a unit is defending a riverbank when faced by an attacker who is in the river then the defender gains bonuses equivalent to defending a building.  This makes it difficult, but not impossible, to succeed in such an assault.

Both sides had roughly comparable forces: 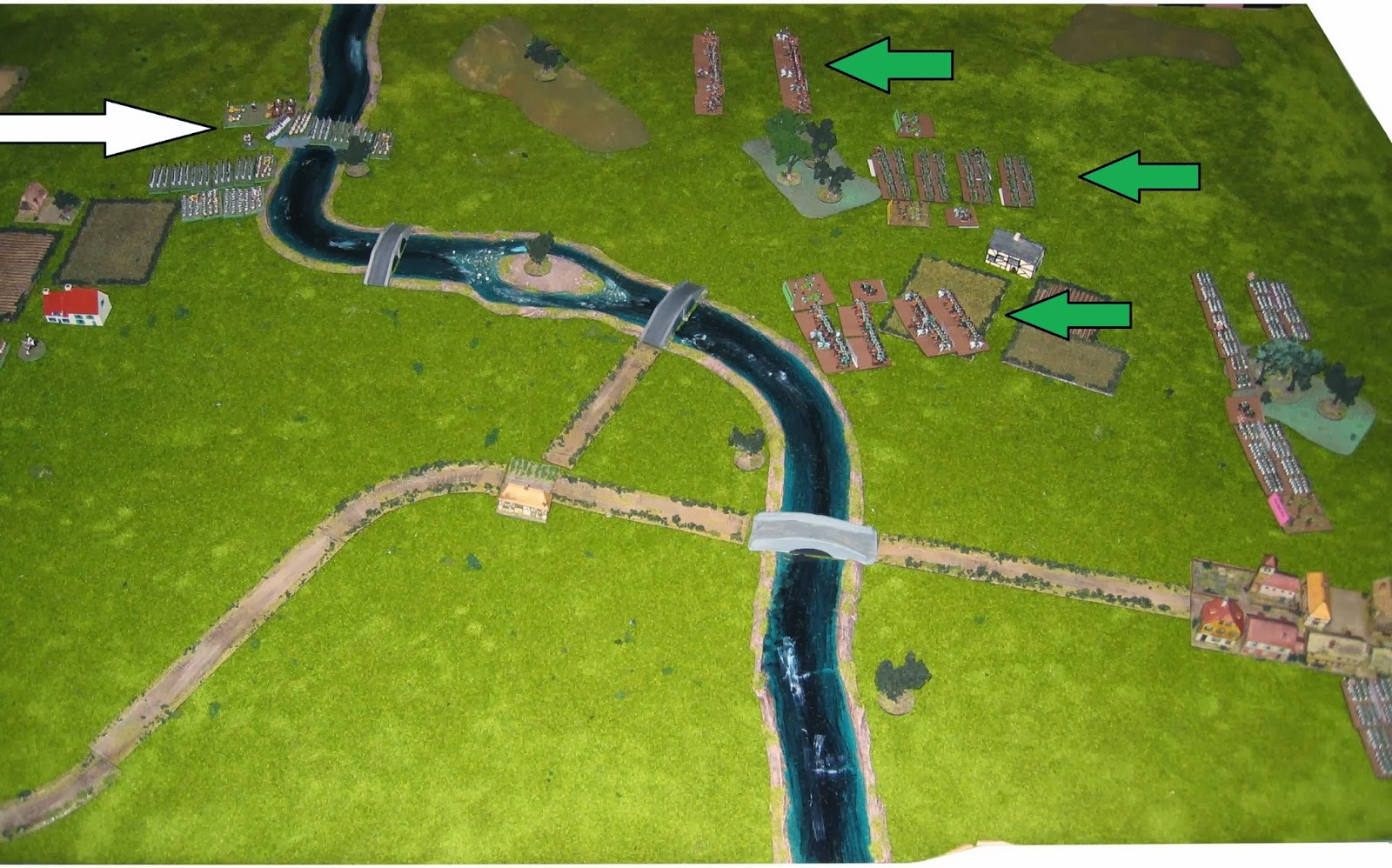 In early moves, most of the Russian army advanced at a reasonable speed.  Their dragoons reached the curve of the river Traisen in the centre of the table.  A hapless subaltern was sent forward to find out if the waters could be crossed at this point; he quickly discovered that they were too deep!

The Austrian army mostly responded with apathy and only marched slowly forwards.  There were 2 exceptions to this: the vanguard blundered and went in the wrong direction, leaving it to the 2nd infantry brigade to make a forced march up to and over the nearest bridge.  The latter was a very risky move, as there were several regiments of Russian light cavalry just on the other side of the small hill.  However, these failed to spot the Austrian columns and just stood around waiting for further orders. 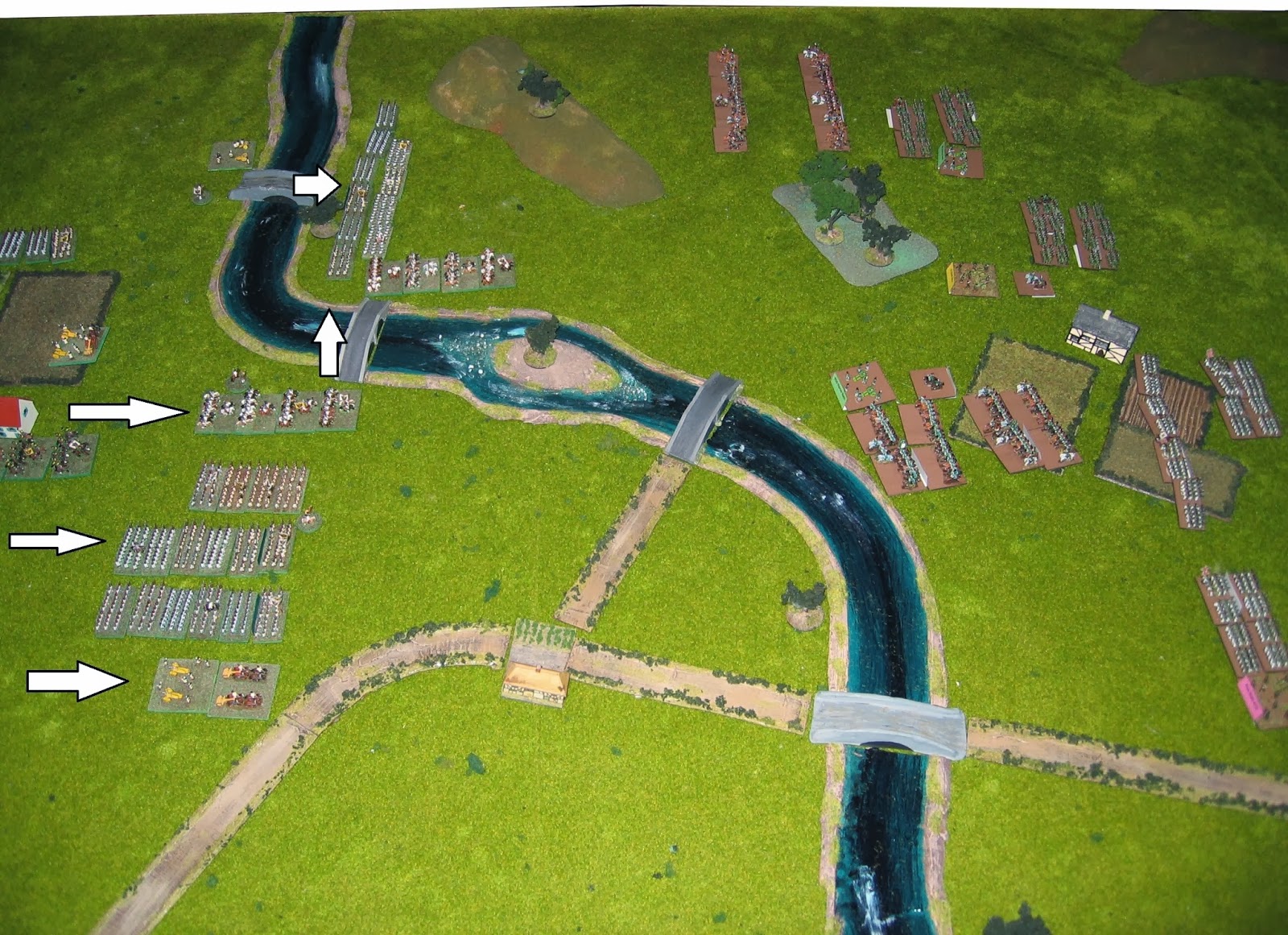 As the first Austrian regiments started to deploy on the far side of the river, they were joined by friendly dragoons and cuirassiers who used the second bridge.  The Russians just stood and watched, not really appreciating the significance of these movements [some useful command rolls for the Austrians and some poor ones for their enemies!]

The fighting was opened with an indecisive skirmish between opposing heavy cavalry units.  Finally, the Austrian vanguard and 1st infantry brigade advanced towards the southern bridges, only to find that the far banks of the river were already lined with Russian infantry and cannon.

The river was completely unfordable at this point.  Under the circumstances, neither side felt like trying to force passage across any of the bridges! 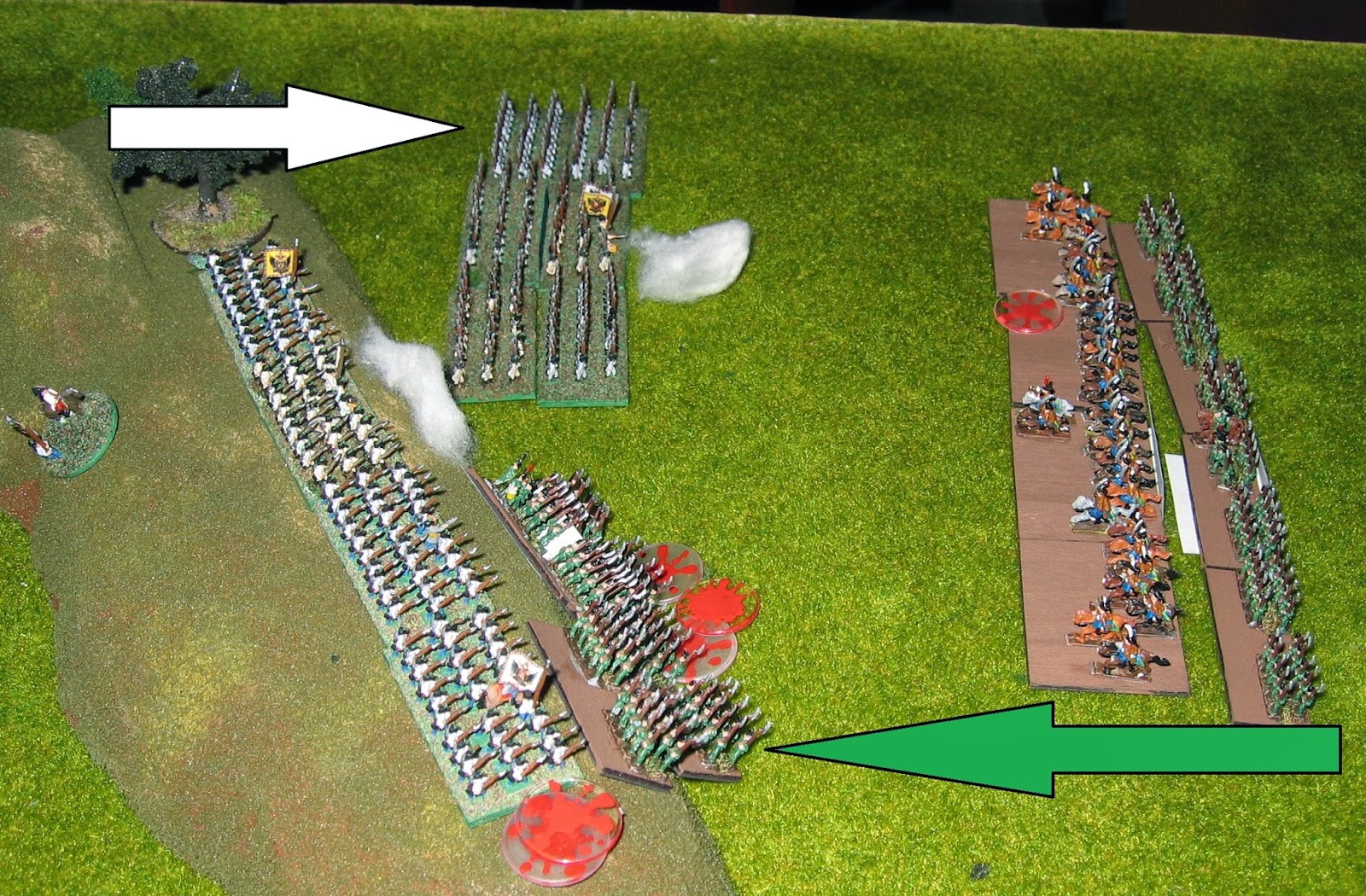 In the north, one of the Russian infantry regiments charged forward without orders [i.e. a blunder was rolled!] at the Austrian unit on the hill.  Casualties were very heavy; both units remained deadlocked for some time with neither willing to give way.

A savagely renewed heavy cavalry charge in the centre left both sides shattered and reeling. 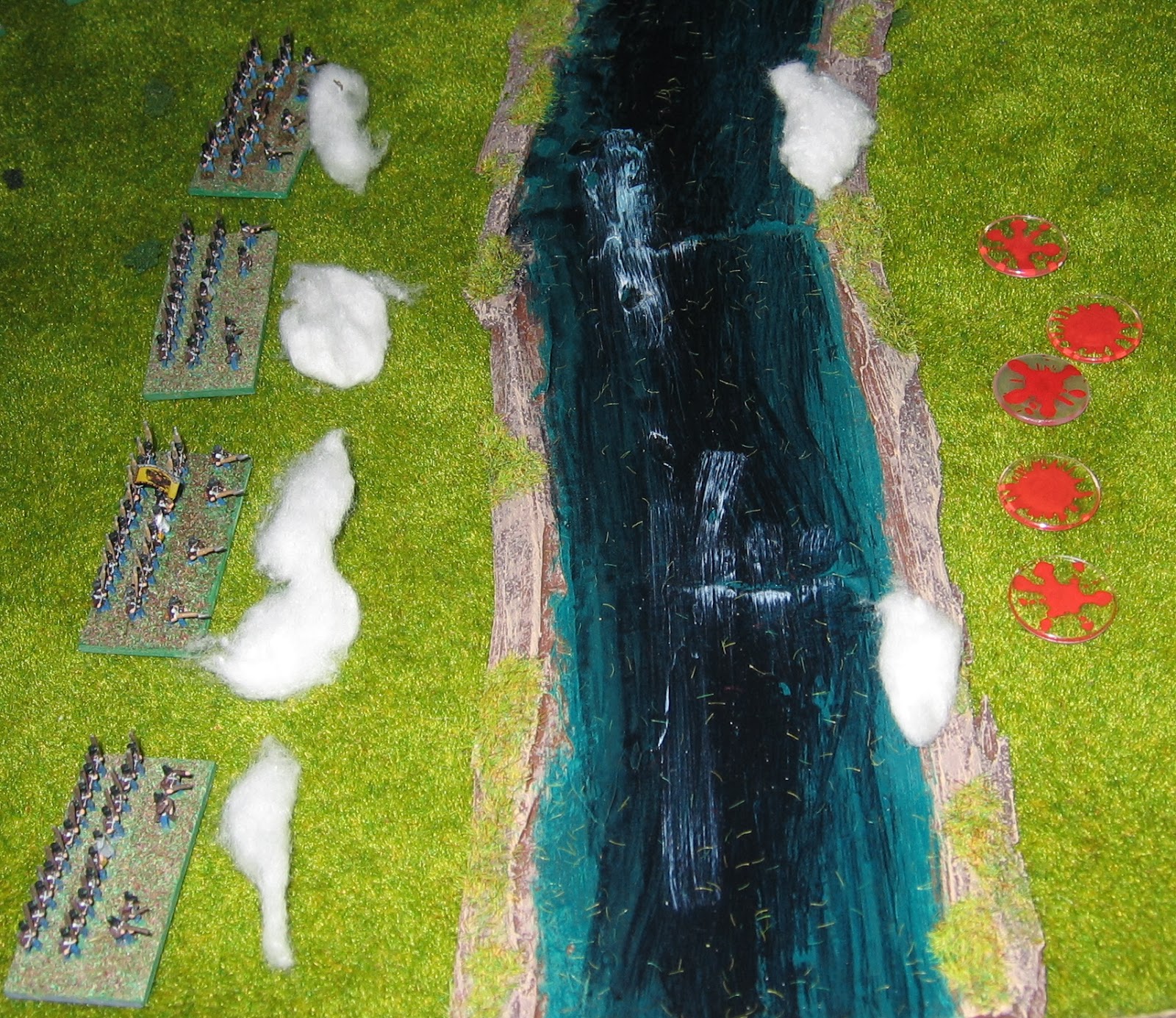 ...while to the south, lucky Austrian skirmishers shot to pieces an opposing Russian regiment. 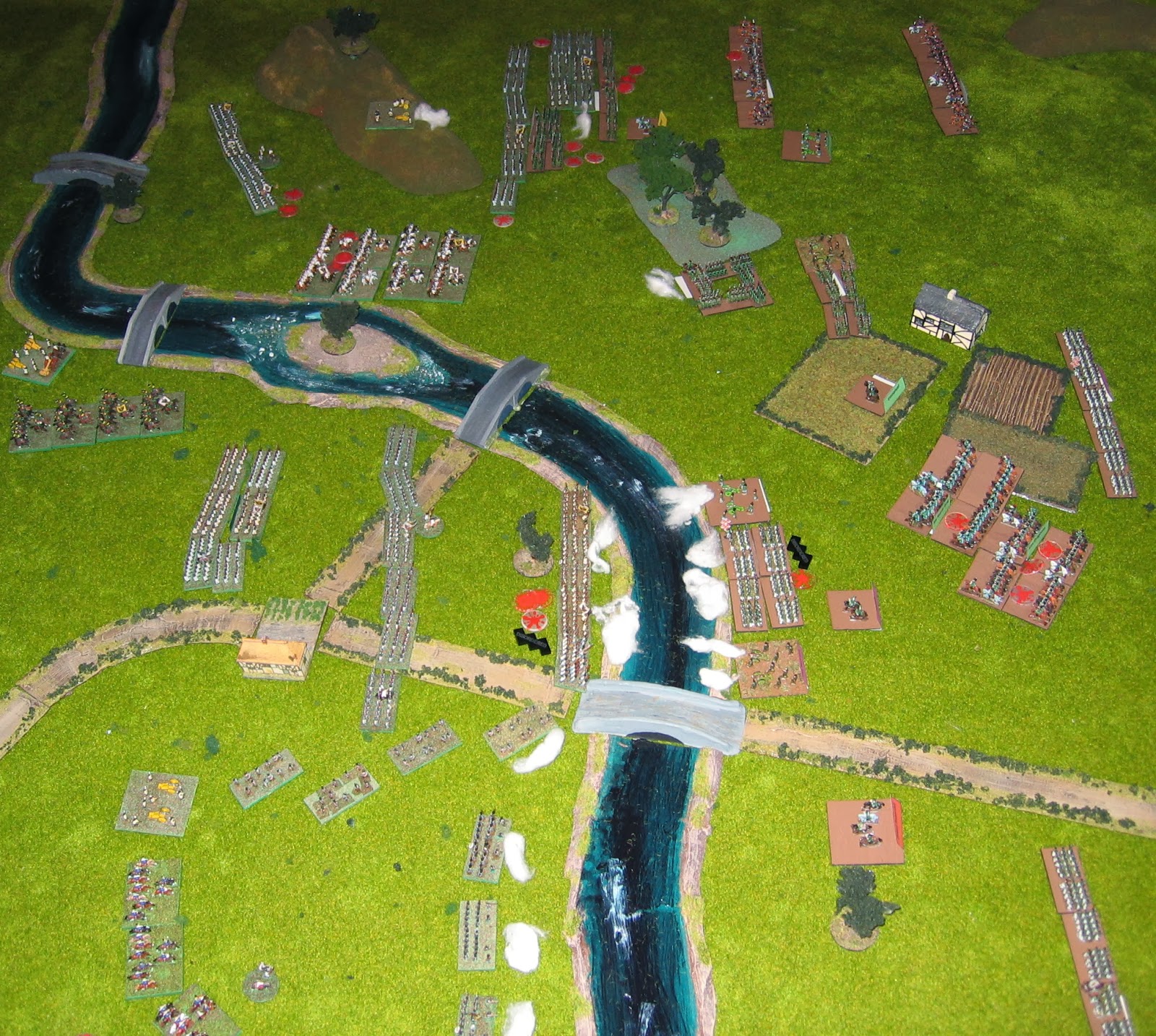 Austrian infantry advanced slowly in the north, though every step was heavily contested.  In the centre, heavy cavalry commanders glared at each other through spyglasses, each side unwilling to risk another bloodbath with a fresh charge.  Further south, infantry and artillery pounded each other across the river, with both sides taking heavy casualties. 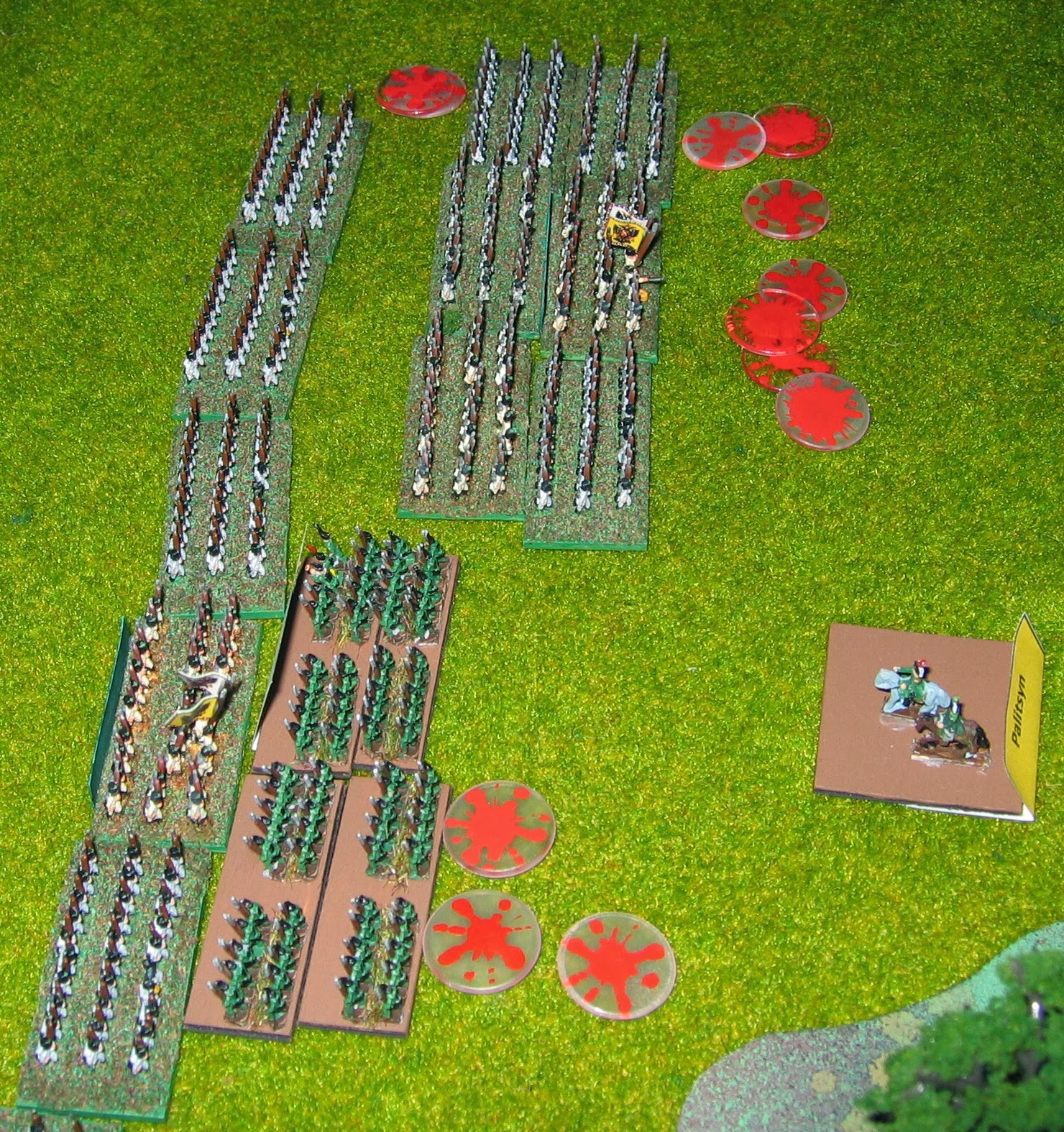 Finally, the infantry of the Austrian 2nd brigade managed to destroy the opposing Russian units in savage fighting.  This caused the enemy's closer infantry brigade to become demoralised.  Indeed, Russian General Palitsyn was nearly captured by the advancing whitecoats; he had to flee quite some way to seek safety with a friendly regiment. 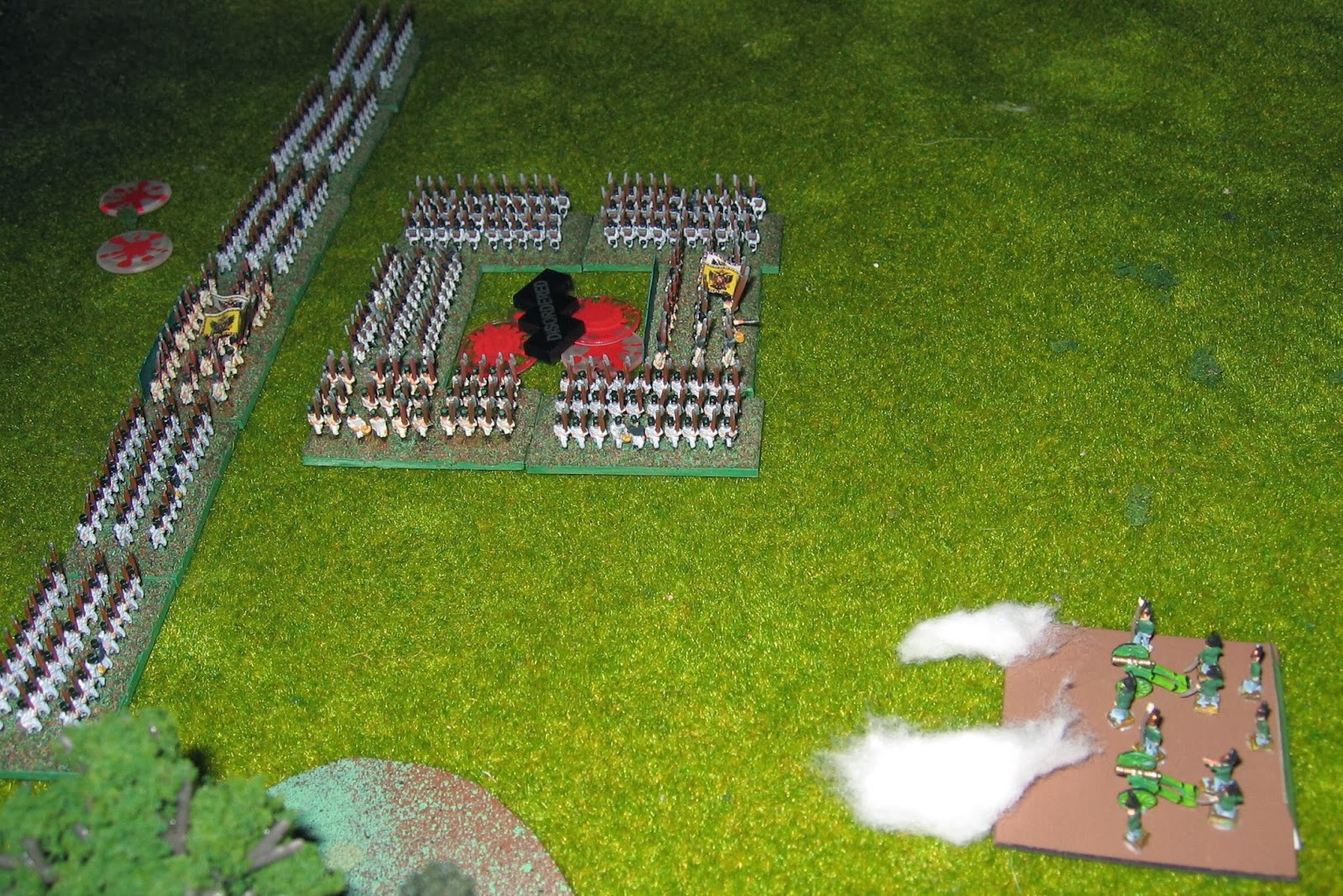 The Russians weren't about to give up, though.  Light cavalry forced the tired, leading Austrian infantry to form square and their accompanying horse artillery then pounded the square with cannister until it disintegrated. 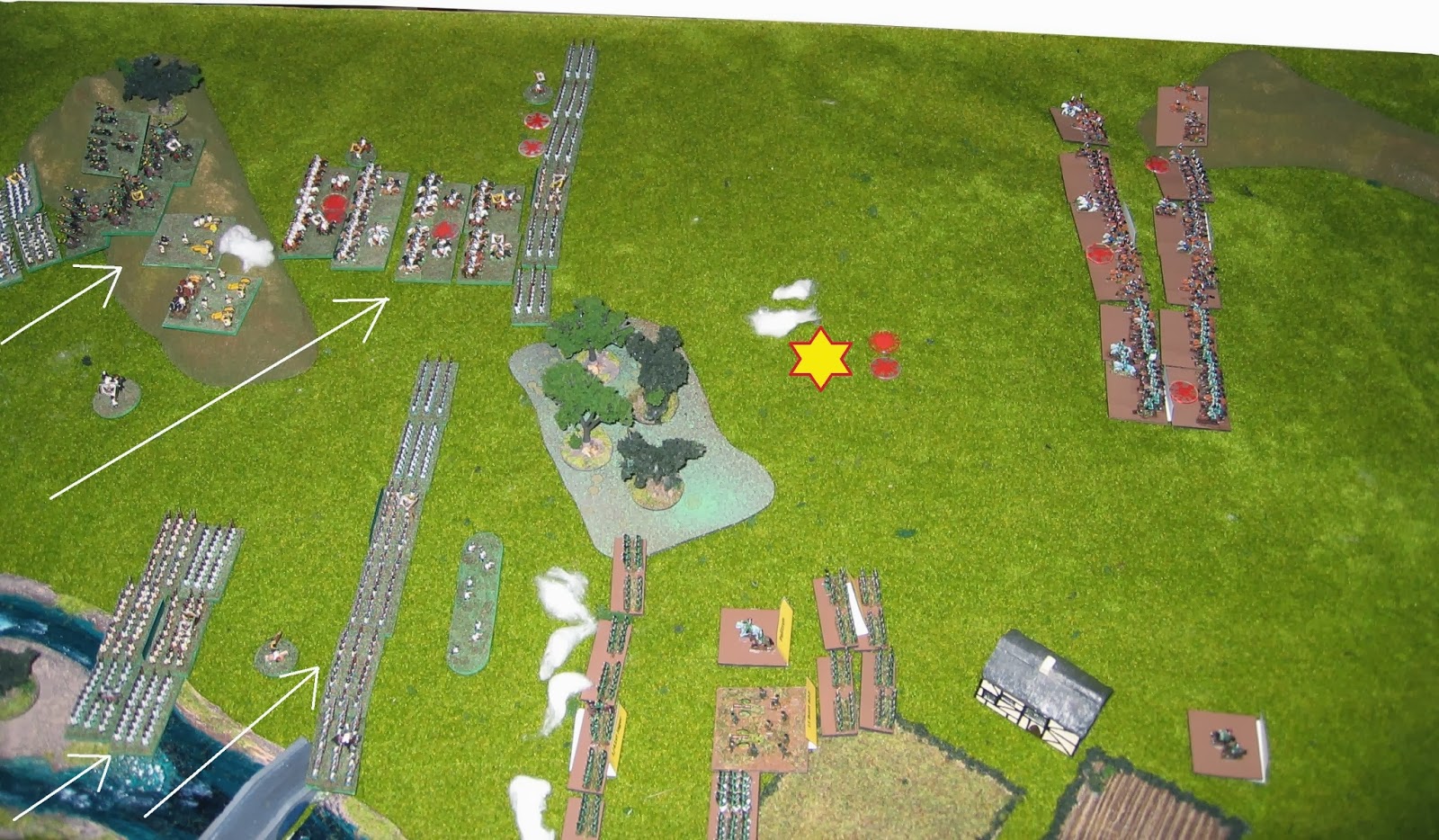 While the remaining units of the Austrian 1st brigade paused to redress their lines (and to shoot down those pesky Russian gunners), massive reinforcements were pouring across the river.  The rallied Austrian heavy cavalry formed up behind the infantry line, whilst elements of the 2nd brigade waded across the river near the island and started to skirmish with the central Russian infantry. 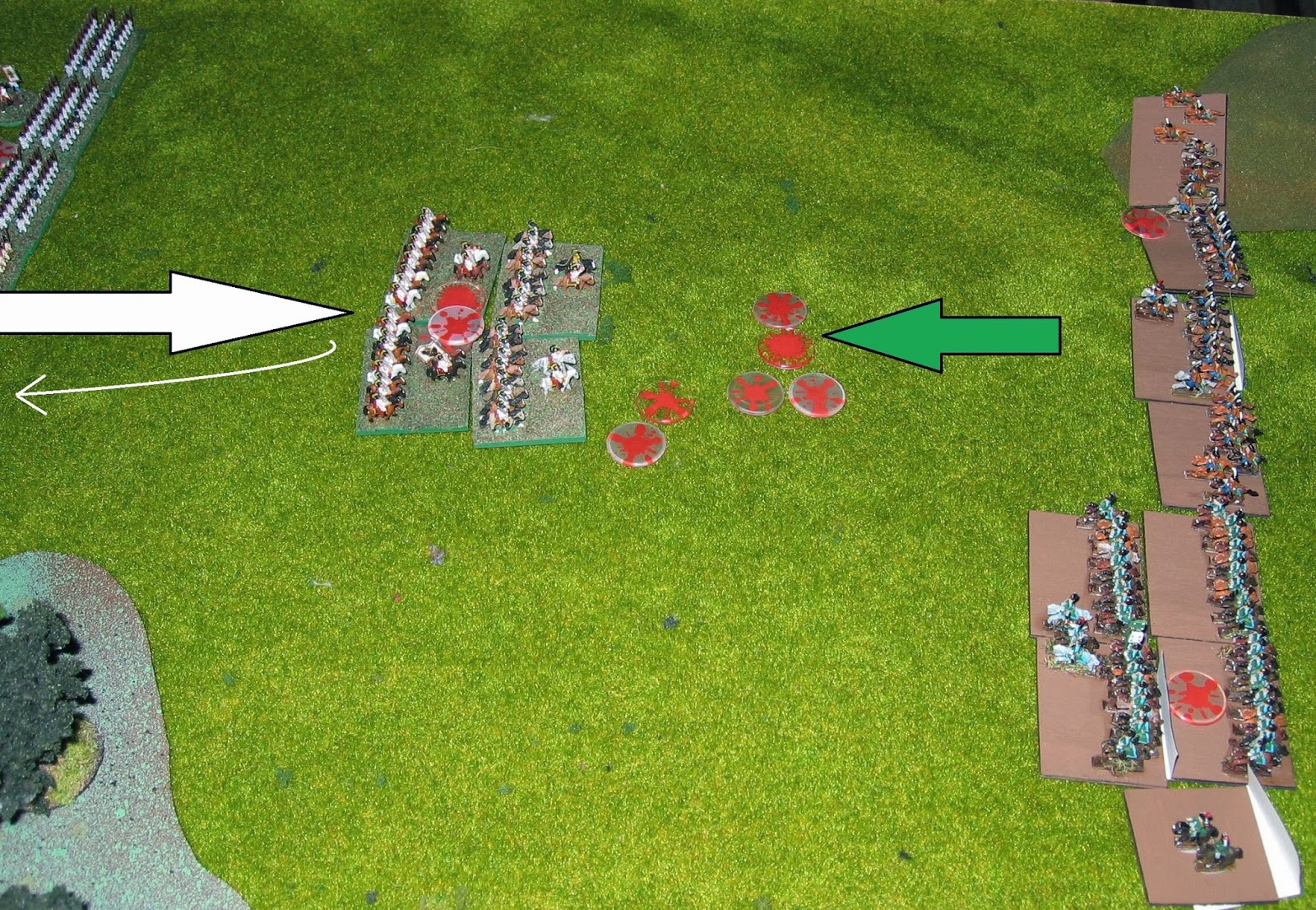 It was time for the cavalry to earn their pay.  Firstly the Austrian dragoons charged at one of the Russian hussar regiments.  The heavy cavalry obliterated their lighter opponents, then retired back behind friendly infantry to lick their own wounds. 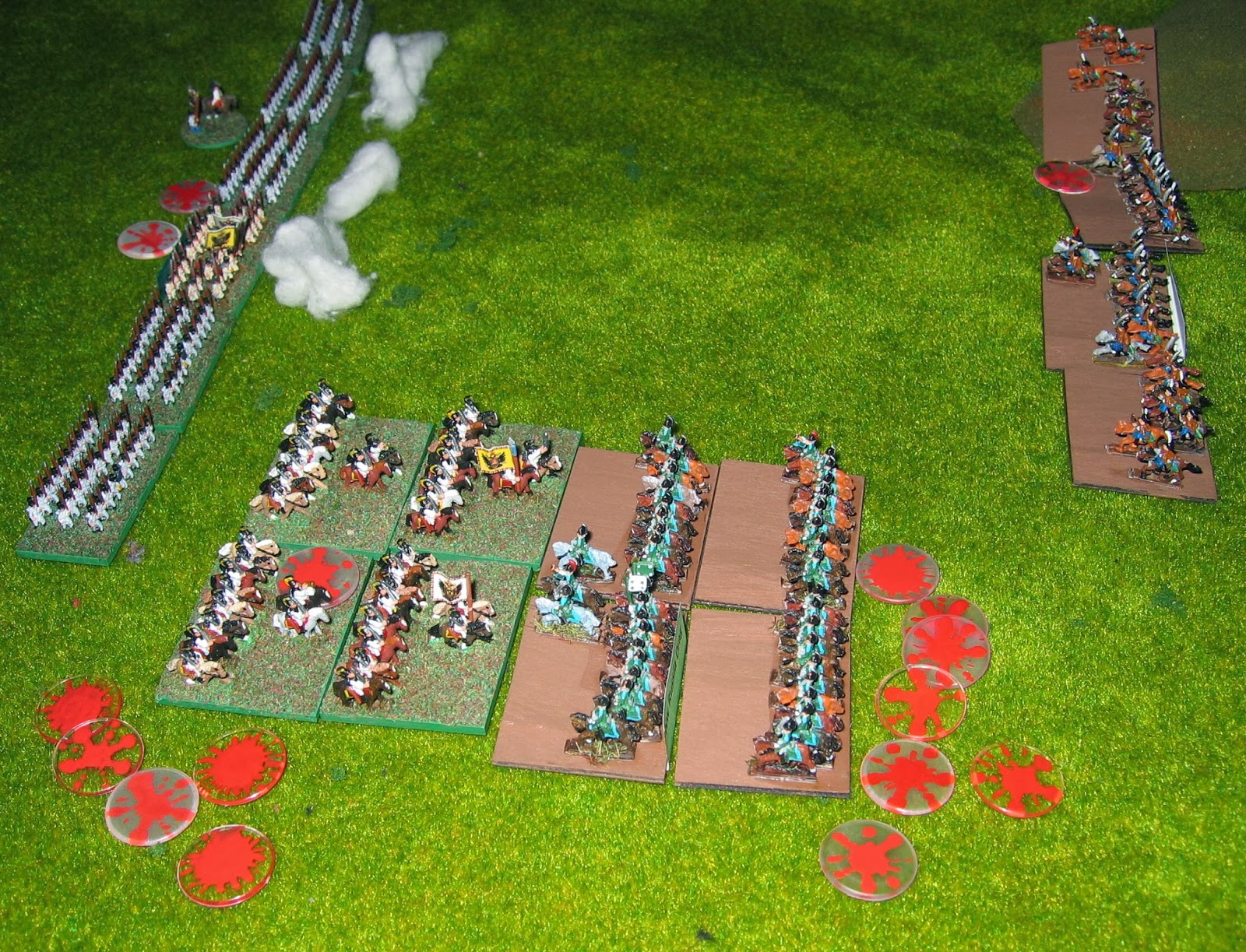 Then the Austrian cuirassiers charged at the Russian dragoons.  In a thunderous meeting, both sides were devastated - but it was the Russians who broke and fled.  This last victory was enough to break both the Russian heavy cavalry brigade and their entire army. 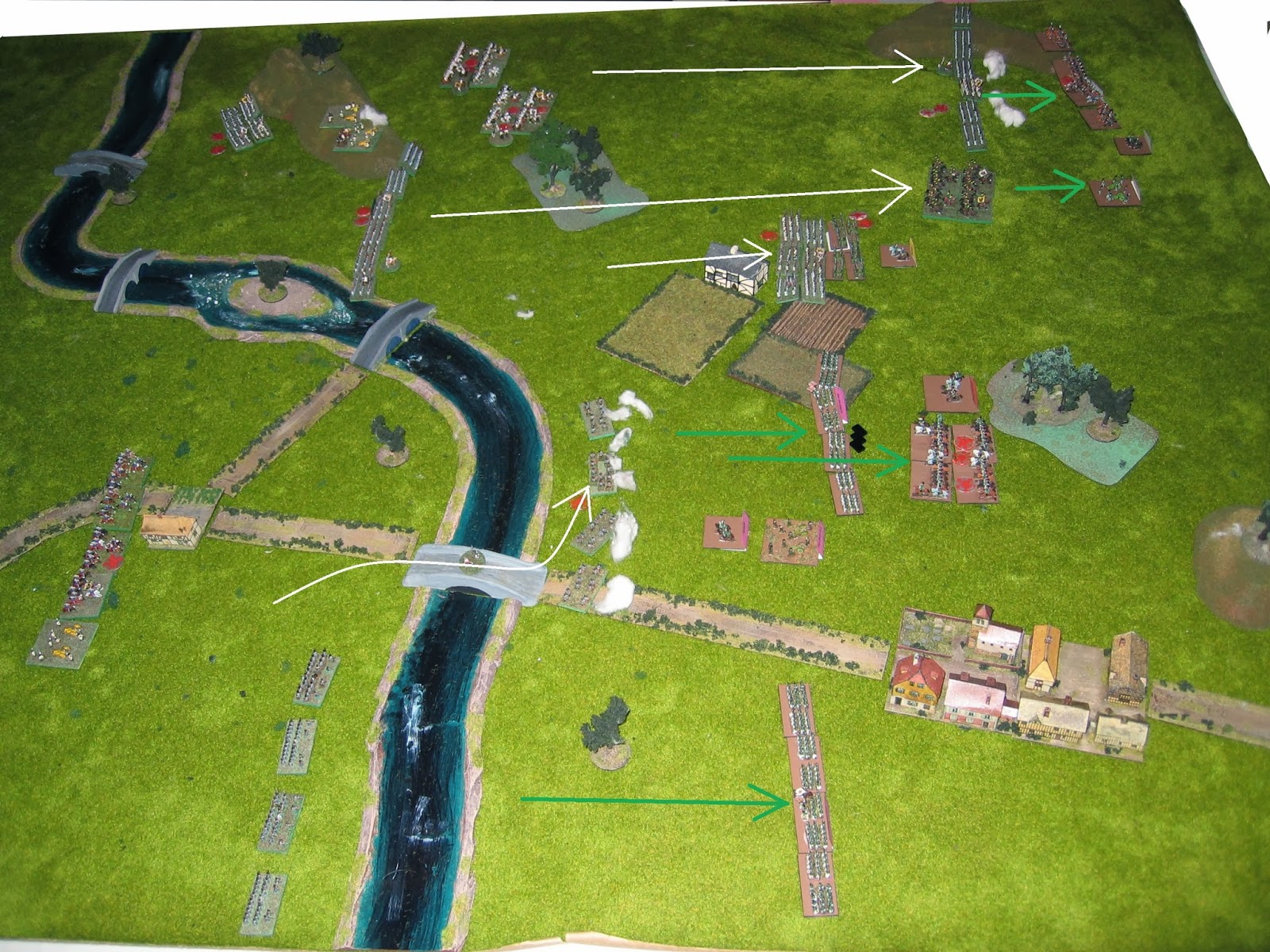 As the remaining Russian units withdrew in reasonably good order, they were pursued closely by a few Austrian infantry units (and the Uhlans, who had finally decided to take part in the action).  All the rest of the Austrian cavalry was exhausted and had suffered severe losses; they were in no fit state to hound the enemy.

It was always going to be a race for the bridges, since the rules would have savaged anyone who tried to march across in the face of any opposition.  As it happened, the Austrian infantry to the north had a general who was really on form in the early game; several units had crossed before the Russians could react.

The game could have turned either way at several points, I think: