Last year, one of my brothers gave me the Revell "Viking Ship" kit for my birthday.  He knew that I'd been enthusing about SAGA and that this would be a useful accessory for my growing band of Viking warriors.  Well, it's taken me over a year to find time to finish it, but here is ... the "Long Serpent"! 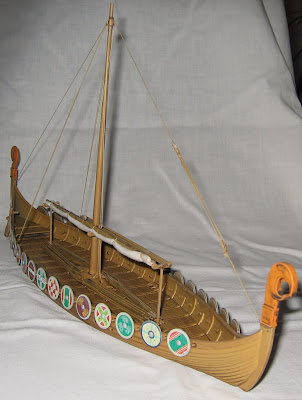 I wanted this to be a gaming model, rather than a static, display piece.  Consequently, I made some changes as I built the kit. 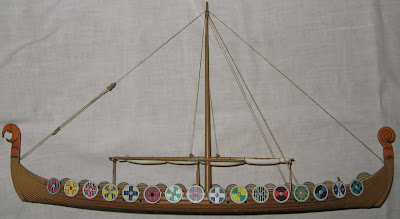 Firstly, I cut the hull down to the waterline so that the ship could be positioned on a regular games table.  This wasn't particularly easy and I may have cut her a bit low.  I suppose that she could be heavily laden with loot?

Secondly, the vessel needed to be "at rest" (either anchored or beached, depending on the game scenario).  In other words, I don't intend to fight ship-to-ship sea battles with this model.

The sail was furled and the yard was stowed.  Rather than using the billowing, vac-formed sail that came with the kit, I made a new one out of a scrap of folded cloth.  Additionally, the oars were glued into piles on the deck instead of being deployed through the sides of the ship.

Note also that the piles of oars are positioned well into the centre of the vessel, thus leaving room for a 25mm figure base on the decks.  There aren't any rowing benches (boxes?) or any other clutter to obstruct the placement of figures.  This omission may not be completely accurate, but it's one of the compromises that is made constantly with gaming models. 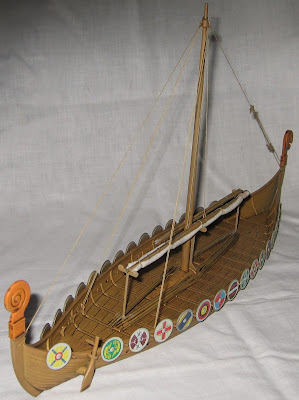 Finally, I chose to use the 32-shield option rather than the 64-shield one.  Partly this was because I couldn't face all those shield transfers, but also I reasoned that the Viking warband would probably have taken most of their shields with them when they went ashore.  In this case, they've left a few spares hanging on the sides of the ship.

I did consider leaving all the shields off, but I felt that this would have spoiled some of the effect.  After all, everyone knows that Viking ships had shields hung over the edges at all times, right?

There is some confusion about the scale of this kit.  The Revell website describes it as 1:72, though the kit's box is clearly labelled as 1:50.  I'd say that the latter is the correct figure; the shields and other details are a good match in size for my 28mm wargaming figures (and 28mm figures are about 1:56 scale, aren't they?)  Either way, the finished model is about 38cm (15") long.

Once the hull had been cut down to the waterline (a difficult job!), the remaining pieces were easy to assemble.  I had to use some blank plastic card to fill in the anchor well at the front of the ship, which otherwise would have gone down to the ship's keel.  This wasn't a big job at all, especially as I left the anchor off the model.

Even the rigging is straightforward and the kit provided an abundant supply of thin, brown cord for the job.  My main concern was that some of the lines might have ended up sagging if I didn't get the tension just right, but this doesn't seem to have been a problem.

The shield decals are a bit weak.  They're fragile and didn't react well to one of my common varnishes (I had to touch up some parts of melted designs by hand).  Also, the printing of the decals suffered very slightly from registration issues for the different colours.  I'm a little suspicious of the patterns on the shields, as they're not really like anything I've seen anywhere else.  Still, I'm no expert on Viking designs and the end result is nicely colourful!

So now I have 2 further problems!  Firstly I'll need to build some coastline terrain for my games so that I can use this model.  Secondly (and more immediately!) I'll have to work out how to store the completed ship!
Posted by Colgar6 at 15:29