I've been slowly building up my forces for SAGA, to the point where I now have quite a decent Scots force (7 points worth, I think).  Most games would use between 4 and 6 point warbands, so I have a choice of which troops to take for this army.

I still need to build up my Vikings to match (5 points at the moment), but true to form I have wandered off target and started an Anglo-Dane warband as well (only a few figures painted, so far).  The Anglo-Danes aren't ready to display, but my earlier units are mostly described here:

Now, it's time for some more Scots... 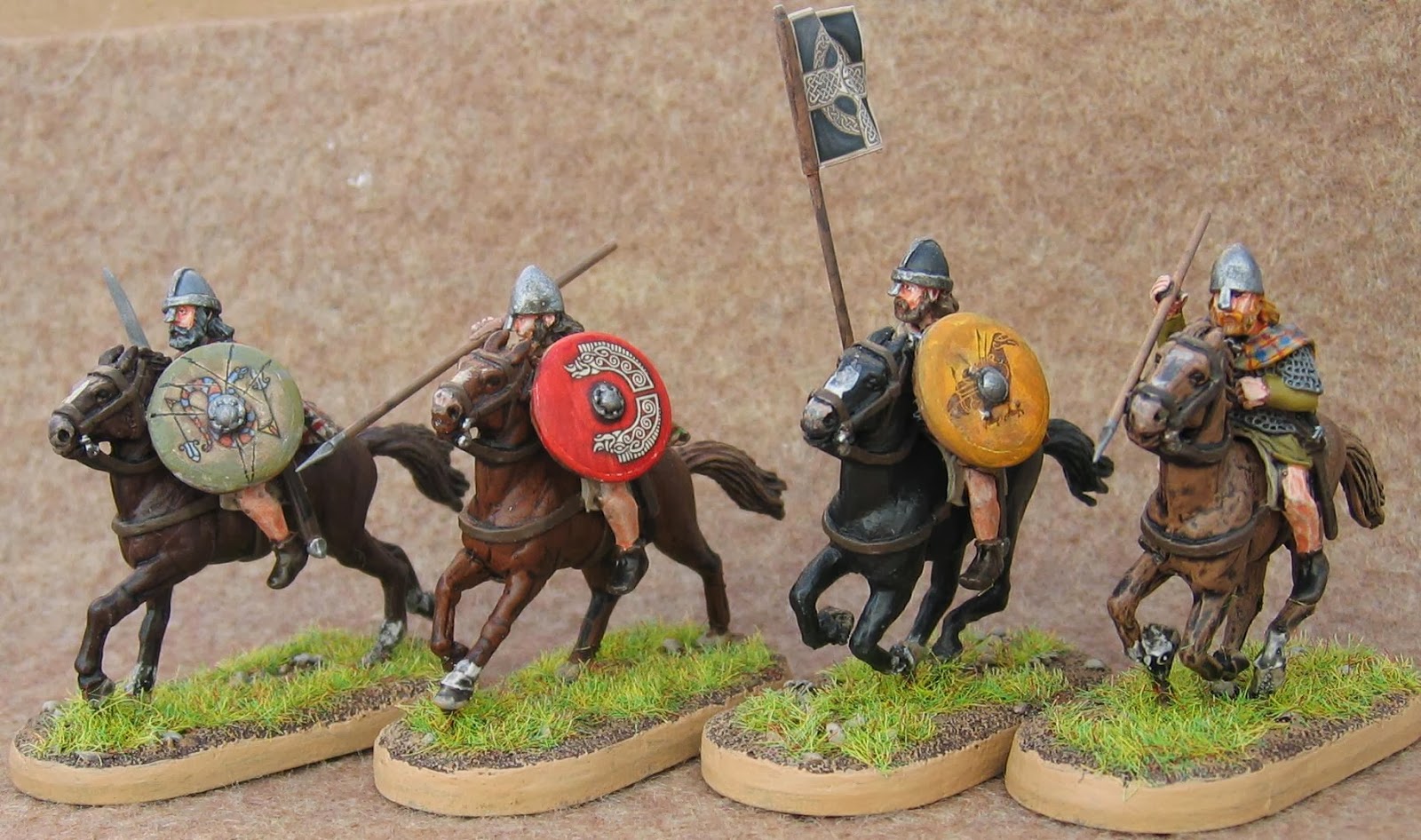 One of my birthday presents last year were 2 packs of Dark Age Scots cavalry by Crusader Miniatures.  This gives me 6 figures to play with, but 1 point of hearthguard in SAGA equates to 4 models.  I'll use the 5th figure as a mounted warlord.  The 6th man (well, boy blowing a horn) will be painted up anyway.  If/when I buy another packet of 3 figures then he'll pad them out into another group of 4. 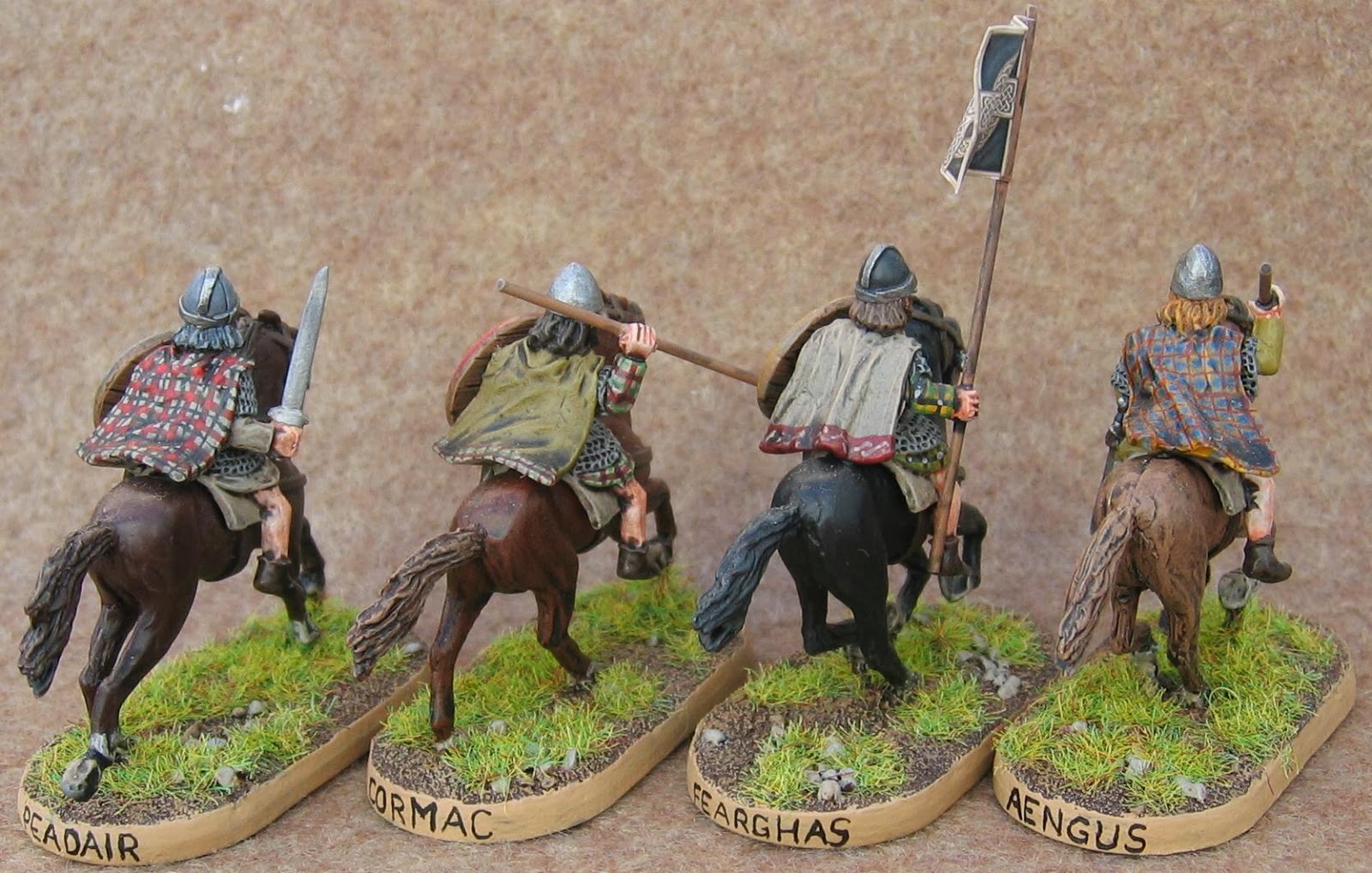 In the one game that these guys have played so far, they performed very poorly (couldn't even defeat a small boy and a flock of chickens).  However, I'm sure they'll improve once they get the hang of things.  After all, they couldn't do much worse!

For Christmas, I decided to buy myself a load of monks.  These can either be passive and act as scenario objectives or distractions, or I can use 12 of them as a unit of "angry monks" in any non-Viking army.  I've read the SAGA rules for such a band and it seems that they'd have very limited fighting ability but there is some advantage to the owner if they become martyrs.  How could I resist that?!

I ordered 12 figures from Gripping Beast, from their 'civilians' range, rather than the ones sold specifically for SAGA.  Although I had intended to buy 3 different sets (of 4 figures each), I ended up with 2 sets of the "parading" monks.  Consequently there are duplicate models here, though I've tried to make them look a bit different by varying the paintwork.

These are not, I think, the best figures that Gripping Beast have ever produced.  The moulds seem to be ageing a bit and so the models needed to be cleaned of more flash and other debris than I would have liked.  I also think that the faces of the ones who have bowed heads are a little lumpy and crude.  However, this minor criticism needs to be kept in perspective: they are completely acceptable figures at a very reasonable price.

As with all my SAGA figures, the monks have suitable Dark Age names.  In this case the names are gathered from all over the British Isles rather than being specific to one faction.  Mainly this was because I couldn't find authentic names for 16 Scots holy men from the 9th century.  No doubt someone could out-Google me at this if they desired, but it isn't really necessary!

The 4 monks with weapons (to the left) are the other part of my order from Gripping Beast.  They have weapons and some armour, though I imagine that none of them are really trained in how to use it.  I suppose there might be the occasional 'younger son of a nobleman' or 'retired soldier' who has fought before amongst their ranks...

On the right are 4 models from Black Tree Design.  Officially these are "Brothers of Shrewsbury Abbey", from the time of the 2nd Crusade (i.e. Cadfael and friends), but I don't think monkish costume changed much over 300 years!

The Black Tree figures are somewhat taller than the Gripping Beast ones.  That doesn't bother me (people come in many shapes and sizes), but I've unwittingly made them stand out by painting their clothing with different shades of brown.  Still, I don't think it will matter too much.