OK, so it's the end of the second week in October.  I'm taking part in the Zomtober challenge again and therefore I need to show at least one completed zombie or survivor.  Once again, I intend to present a duel and see what my readers think are the possible outcomes. 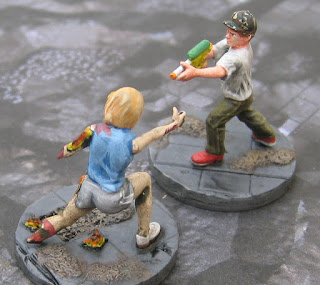 Let's start with Joey.  He's a plucky boy, probably about 10 or 12 years old.  The model is from Wargames Factory's "Apocalypse Survivors: The Men" plastic set, but with a couple of small changes.

Firstly, I've given him a baseball cap.  This was very simple: I cut the cap from one of the spare adult heads in the same set, cut off the top of the boy's head and glued the two pieces together.

Secondly, Joey is wielding a super soaker (a large water pistol, for those readers who don't have their own children).  This was scratch-built by cutting down the weapon on the boy's submachine gun arm and then adding plastic rod & modelling putty.

The painting on this model was very simple, though I tried to contrast the bright, plastic colours of his toy gun with the muted camouflage of the cap. 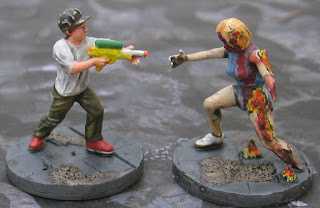 Why "Hot Chick Zombie"?  Well, if you'll pardon the apparent sexism, she's on fire!  The zombie is not totally consumed in flames, but does have something flammable burning in patches along her left-hand side and dripping on to the ground.  Whatever set light to her may also have destroyed her foot and hand, as these are missing, as is the left side of her face.

The zombie model is again from Wargames Factory, though this time from the "Zombie Vixens" set.  She's an out-of-the-box build, though with some green stuff "flames" added to leg, arm, hair and base.

Incidentally, the bases for both of these models are moulds from my Urban Basius II pad, though from relatively plain areas without much relief detail (these were tester pieces). 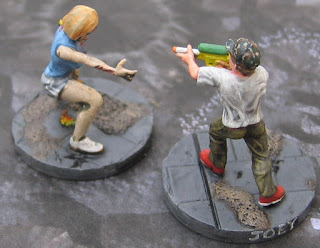 Given what I know of water pistols (they're inaccurate, have very short range and leak constantly), I really don't think that either flammable or corrosive liquids would be a good choice.  Equally, water isn't going to bother the zombie for long.

No, I think that Joey's only advantage here is that the zombie is considerably damaged and will probably be unable to move quickly, if at all.  Run, Joey!  Run!