It's the first Sunday of the 10th month in the year, which means that it's Zomtober!  I've not seen much evidence that anyone else plans to mark this, but I've been presenting articles for the past 3 years (2013, 2014 and 2015); I don't intend to break the pattern now.  So, here is another duel; a pairing of a zombie and a survivor, both recently finished models.  Who will win this one? 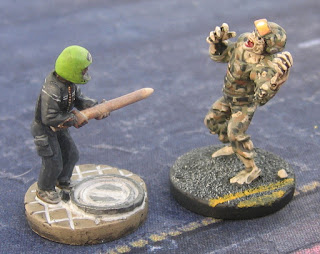 For the humans, today's contender is "Postie".  He's a teenager or young adult, wearing a leather jacket and crash helmet.  I'd give him points for the level of protection provided by such clothing, though the helmet might reduce his hearing and peripheral vision a bit.  However, his choice of weapon (an unused fence post) is probably sub-optimal and his posture suggests that he's a bit hesitant and afraid. 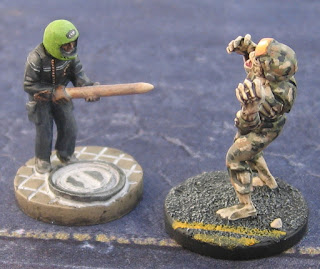 Facing him is "Mantic Plague Zombie".  I had wanted some zombies in army uniform for a while.  Earlier this year, I saw a box of Mantic's sci-fi infected troopers on sale (for a rock-bottom, bargain price) and I just couldn't resist.

MPZ has full battledress, including helmet and body armour - apart from any boots.  He is (was?) also a large man and therefore looks capable of overpowering Postie quite easily.  However, the zombie seems to be putting most of his effort into thrashing about and roaring, though whether this is an attempt to intimidate his victim or is a reaction to his own pain and anguish isn't entirely clear. 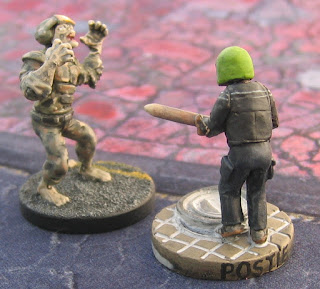 The human figure is from Offensive Miniatures; he's one of their "street kids".  I've mounted the figure on a resin base from Escenorama (I still have many of their bases remaining, even though it's 2 years since I first obtained them: here).

Annoyingly, the paint on the base has "silvered".  In my haste to prepare the figure for today, I haven't let the wash dry completely before varnishing it.  I'll have to re-paint the base.

As mentioned before, the zombie is a model from Mantic Games.  These are hard plastic figures in a variety of contorted, agonised poses.  Most wear uniforms and have body armour, but quite a few are bursting out of their clothing ("hulk-ing") and have spiny bits growing from their flesh.  That's all very well for a science fiction plague, but doesn't really fit in with my world of zombies, so I've removed the spikey bits wherever possible.

If this was a typical, urban zombie then it's possible that Postie might be able to impale the creature and keep it at a distance with his stake while he works out what to do next.  However, I cannot see this working against a large, raging monster that is wearing body armour.

Keep the stakes for vampires, Postie!  Run away, as fast as you can.  If your motorbike is handy then use it instead; that would be even better...