7TV: The Mystery of Frenchman's Cove 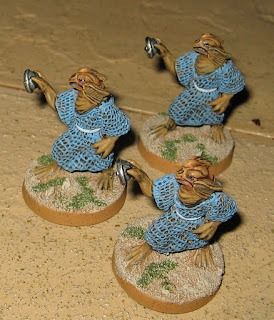 Recently at the Helensburgh games club, I had the urge to play 7TV again.  I wanted to use my new "haunted" lighthouse model; this seemed like an excellent opportunity to deploy a "Scooby Doo" cast!  Hmm, who could be their opponents, then?  Who...Doctor Who...monsters...why, Sea Devils, of course!  I downloaded the free "Scooby Doo" program guide from the Crooked Dice website and set up my game. 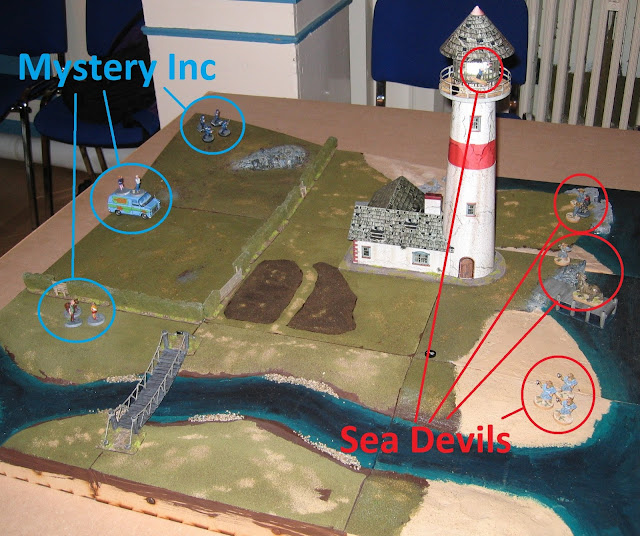 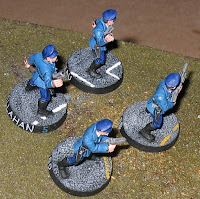 The program guide has just a single scenario and this uses a fixed cast for Mystery Inc:
There's also a lost friend ("Tia") who is added to this cast when/if she is found.
Note that this cast is short on fighting skills, especially for ranged combat.  However, they do have a lot of gadgets, special effects and star qualities. 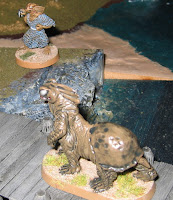 As opposition, I put together the following:
The monsters have quite a lot of firepower, but the alien warriors are unreliable allies.  Also note that the cast is dominated by extras and therefore won't generate as many plot points as it would like. 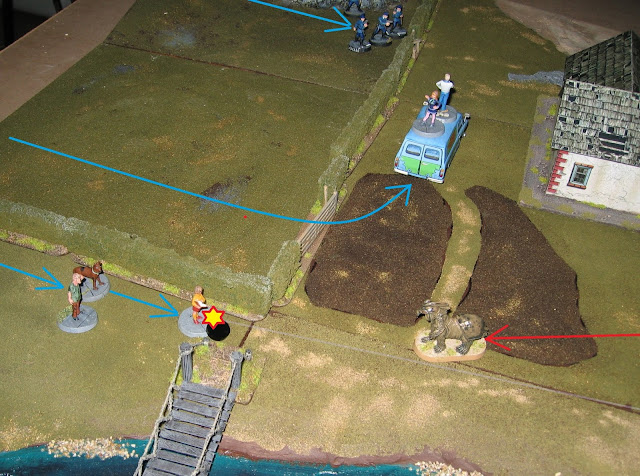 
Worryingly, the Myrka was charging across the grass towards the good guys! 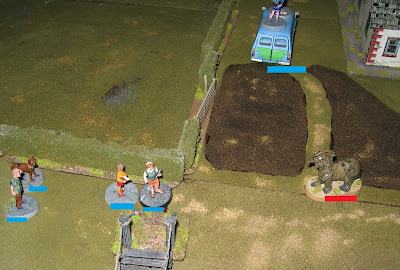 In a stroke of outrageous luck, the very first objective counter investigated by Mystery Inc turned out to be the lost friend, Tia.  This would give them significant victory points in the bag if they could just get her to run off the table the way they had come.  Easy! 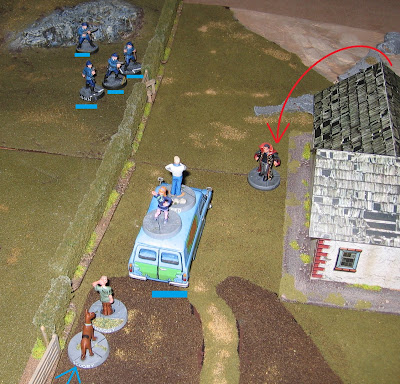 Shaggy had an interesting ability: if he ran at full speed then he could cause an enemy to run towards him, also at full speed.  Normally I imagine that this would be used during a chase, but in this case Shaggy and Scooby ran towards the lighthouse, thus causing the Master to attempt to intercept them.  In doing so, the villain had to run straight across the gun line of local deputies!

It was a very cunning plan, only spoilt by the fact that the deputies couldn't hit the broad side of a barn.  The sinister mystic may have used a few plot points to mess with their minds as well; that probably didn't help!  Whatever the reason, the Master emerged from the fusilade unscathed.

In desperation, Fred activated several traps and gadgets.  His rocket cigarette bounced off the Myrka without injuring the beast and the Master evaded the capture bubble with ease. 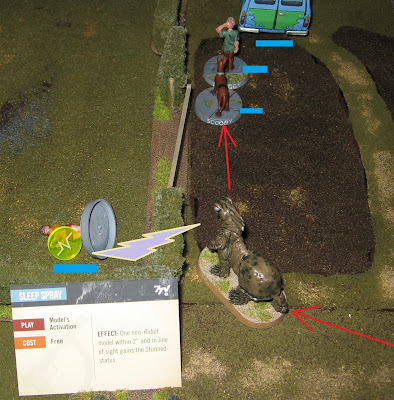 The angry monster retaliated by zapping Velma and then charging Scooby Doo from behind. 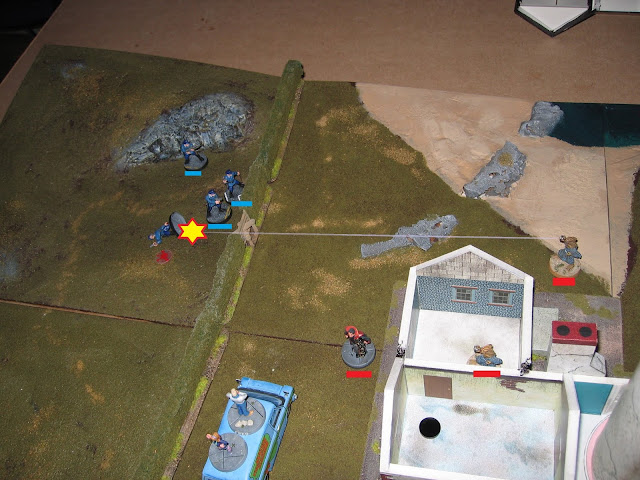 Things started to go bad for Mystery Inc now.  Firstly, an alien warrior shot down one of the deputies; even though he was behind a hedge the heat beam passed through the cover as if it wasn't there. 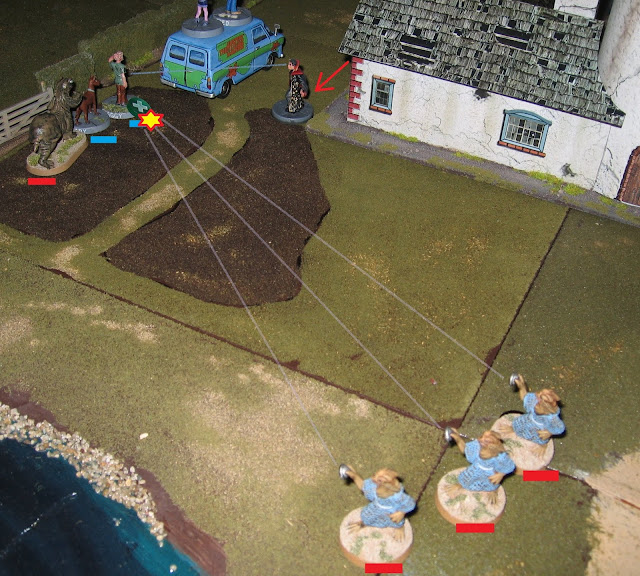 Then Shaggy was subjected to a series of attacks from the Master's disorienting gaze and the alien weapons of a trio of Sea Devils.  The combination was too much for him and he disappeared [I reckon that Shaggy probably couldn't take the mystic's withering glare and crawled under the hedge to hide there for the rest of the game, rather than being killed by the aliens' ray guns.  The effect was the same either way: the model ceased being in play]. 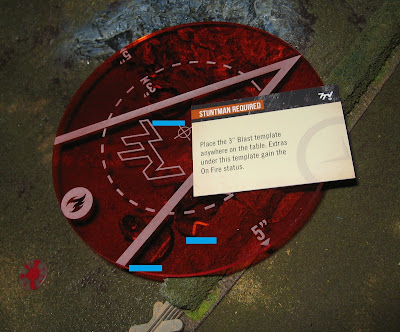 With yet another piece of bad luck, the remaining 3 cops were set on fire by a badly-judged piece of pyrotechnics[another countdown card!].  Perhaps the alien soldier's heat ray had set fire to the hedge, or the grassy embankment? 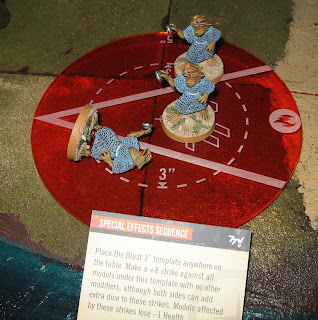 In a strange reversal of fortune, some of the alien warriors were then subjected to a gratuitous special effects sequence.  The series of explosions left one of them dead. 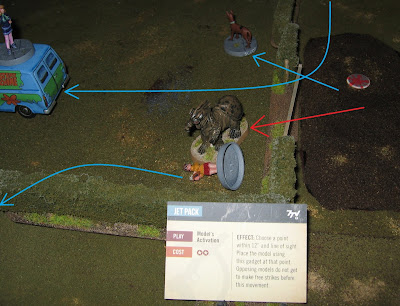 Having scared off Scooby Doo, the Myrka turned its attention to the stunned Velma.  She recovered enough (just!) to escape by means of a jetpack gadget.  At the same time, Fred and Daphne gave up any hope of recovering more objectives, turned the Mystery Machine around and fled... 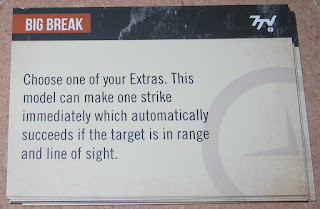 In the last turn, while Mystery Inc fled the table, the good side drew a Big Break countdown card.  They only had 2 extras left, the sheriff and one of his deputies - both of whom were still on fire. 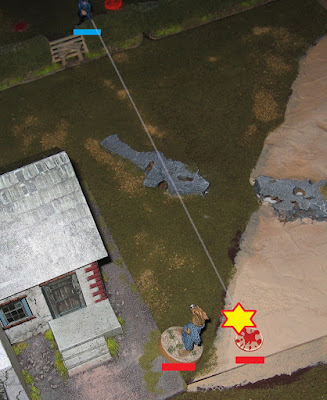 The opportunity was too good to waste, so the deputy drew a bead on one of the alien warriors who were advancing up the beach - and nailed the loathsome creature! 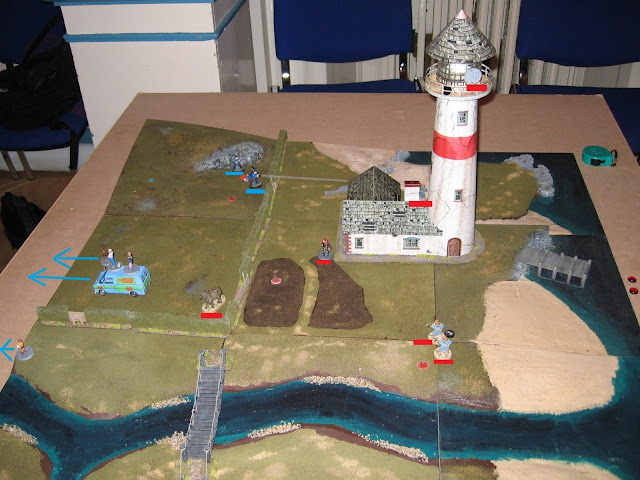 Even though Mystery Inc had fled, they did recover 1 objective - and it was the most important one as it turned out to be their missing friend, Tia.  When the victory points were added up, it turned out that this scored enough to counteract the loss of Shaggy and give the good side a victory by 1 point!

I feel that the monster side were somewhat cheated by this rather technical win.  After all, the good guys ran away without solving the riddle of Frenchman's Creek.  Indeed, the monster side never even got to use all their models; their spy wasn't activated at any point.  The lighthouse keeper just watched over the entire debacle from his tower, probably laughing softly to himself at how his plans were coming to fruition...

I feel it's worth making a few comments about the game play.  The Mystery Inc cast is a very unusual one which cannot do much to hurt its enemies.  Instead, it needs to use its abilities to score victory points in other ways; this probably requires some very imaginative planning.

It's difficult to keep track of all their special effects and star qualities; they have so many.  When you add in "disadvantage" effects which the monster cast may have, the range of possibilities becomes overwhelming!  How many of you remembered that the alien warriors were unreliable?  Mystery Inc could have spent plot points on them [up to a point] as well as their own models - but who can keep track of all of this?

Another comment: we used virtually the entire pool of gadget cards in this game [Mystery Inc get to choose from a huge number of cards].  If we play with these casts many more times then I suspect that the gadgets will become a bit predictable.  It would be nice to have a much bigger set of cards, just to keep things fresh and different.

In a similar vein, more [generic] countdown cards and more Mystery Inc-specific scenarios would be very nice to have!