You lucky people!  There are 5 Sundays in October this year, so that means you get to see 5 Zomtober posts from me.  Here's the article detailing my efforts for this fifth week.

"B" vs Fairly Average Zombie 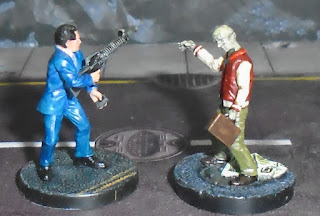 Here we have an encounter between "B" ( a member of my occasional "Men in Blue" quasi-governmental organisation) and a fairly average zombie (who will be referred to as "FAZ" for short). 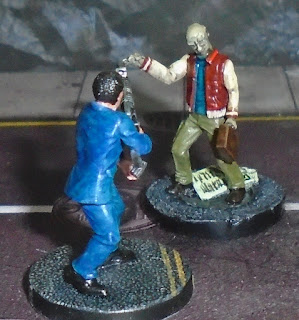 "B" has an assault rifle in one hand and that ought to stand him in good stead.  However, he has a magazine in the other hand.  Is he in the middle of reloading and about to insert fresh ammunition into the gun?  Has he removed the magazine because his weapon is jammed and he's trying to clear the blockage?  Or is there some other reason for the magazine in his hand? 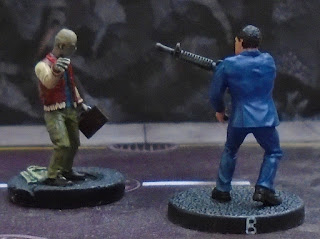 Whatever the reason, "B" seems to have been taken by surprise.  Although FAZ doesn't look especially threatening (for a zombie!), I imagine that he's still quite capable of inflicting a nasty bite.. 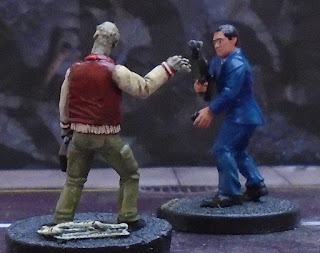 "B" was built from the old Wargames Atlantic "Apocalypse Survivors: the Men" kit.  Although the original supplier is long gone, I believe that this has just been relaunched as part of Warlord Games' "Project Z" range.

FAZ is a mixture of parts.  Most of him comes from Studio Miniatures' plastic zombie frame, but the arm with the briefcase is from one of the old Wargames Atlantic kits (I cannot remember which one).

As always, it's up to my readers to decide what happens next?  Will B reload his gun in time to blow the zombie's head off?  Or, failing that, will he quickly reverse the gun and use it as a club to beat FAZ down?  Or is the element of surprise in FAZ's favor: will the zed close and bite B before the man can react?

What do you think?