Lost Lands: attributes for the animals 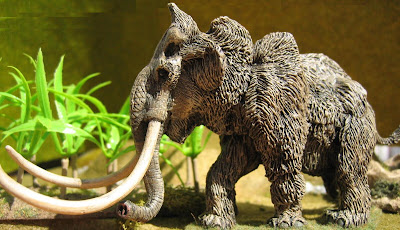 I've always wanted to play wargames set in the Lost World, where intrepid explorers discover an unknown part of the earth that is still inhabited by prehistoric creatures.  In my case, I prefer prehistoric mammals, terror birds and the like over dinosaurs, but the principles are much the same.  Either way, a good game must involve some plausible animal behaviour and at least some threat to the humans.  This isn't easy when we're dealing with such asymmetric sides as gun-armed Victorian hunters versus unsuspecting wildlife. 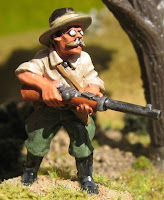 Over the years, I've collected a number of sets of rules which cover this type of game.  It's not my intention to provide a full review of each of these here, but a summary will be useful.  Each set has its own merits, but I find something lacking in every case:

Lost Lands comes closes to providing the type of game I desire.  The main issue that I have with it is the behaviour of the different classes of animals.  So, what can we do to alter this?

In Lost Lands, a creature's reactions are determined mainly by its class, though this will be modified by its REP (roughly speaking, the lower the REP, the less aggressive the creature is within its class behaviour).  There are only 2 classes: ferocious and feeder.  With a few possible exceptions, the former covers all carnivores and the latter is for herbivores.

These could be used separately from the behavioural changes, if desired.  None of them really interact with the modified reaction tables below.

Technically, these are subclasses, since the existing ferocious and feeder categories remain.  Each type of animal must have 1 (and only 1) of these subclasses:

I suggest that the "In Sight" test is also used to determine what an animal does if it has just killed or incapacitated all its melee opponents.  This will determine whether to make further attacks or to revert to feeding or to run away.

As well as the regular statistics given in the Lost Lands rulebook, here are some examples of the attributes that I give to various animals:

These house rules haven't been tested to any great extent.  It's possible that there will be issues with my approach, though I believe that the intent is clear enough.  I'd appreciate hearing any suggestions for refinements, discussion about my classifications or any other relevant ideas.
Posted by Colgar6 at 14:18