It's Zombtober again (see Brummie's Wargaming Blog if you don't already know what Zombtober is)!  This will be my 3rd Zombtober and, as in 2014 and 2013, I plan to present a series of "duels".  Each week I'll show a new survivor and a new zombie, together with a short description of their current situation.  The question then is "what happens next?"; anyone can join in with opinions or theories. 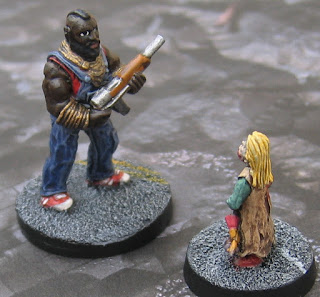 For week 1, I've finished painting a couple of models that were not-quite-complete after the "Big Tidy".  These figures have been hanging about on my painting desk for a very long time, so Zombtober was the perfect reason to finish them. 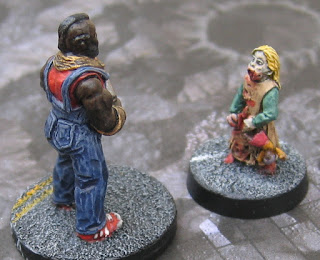 "B.A." is, of course, based on the character of B. A. Baracus from the television series "The A-Team", as played by Mr. T (do none of these people have real names, rather than just initials?).  The model is from Foundry's SV037 "B Team" pack.  The figure is a little wooden in pose and I feel that the sculpting is a bit soft (especially of the face), but it is a very recognisable miniature and I'm happy to have it in my collection. 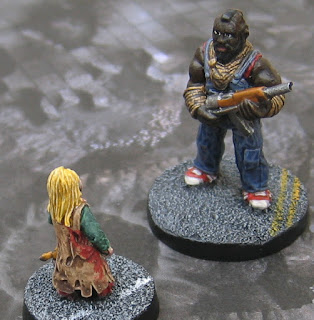 The little girl is, I think, from Studio Miniatures - though their website is down right now and I cannot verify this.  She's been in the wars a bit: her face (especially around the jaw and mouth) is all smashed up and she also has a gaping hole in the side of her torso.  However, she's still clutching her doll.

I painted the doll as a simplified version of "Upsy Daisy", from the popular kids TV series "In the Night Garden"; it seemed as good a starting point as any other. 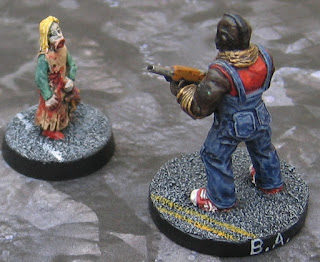 I have no doubt at all that on an average day B.A. could overpower LGZ physically very easily, either by shooting her or in melee - it's just no contest!  However, I do wonder if his heart is in the job?  B.A. looks a bit vacant; he's either staring at something in the distance or he's lost in thought.  Either way, he's distracted. 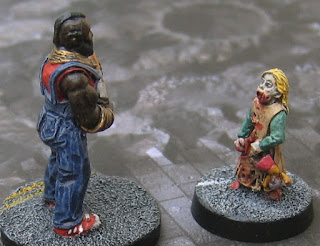 If his head isn't in the game then LGZ might be able to bite B.A., though with a smashed jaw even that could be tricky.  No, I think that LGZ's best chances are either to freak out the big man by standing and staring at him, or possibly by moaning loudly enough to attract a pack of adult zombies.